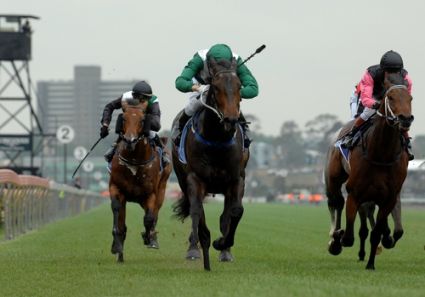 It's funny what this game can put us through but there were no worries with Triangular at all, as Tom George's charge landed some decent support with the minimum of fuss - turning what looked to be a competitive handicap into a procession. His jumping wasn't foot-perfect on the first circuit, as he was quite careful at plenty of the fences, but it improved so much as the race went on and he jumped like a stag, particularly the last couple. I was worried about the trip being an issue but the tongue-tie clearly helped him and in all reality, he could have went around again without breaking sweat. He didn't have to break sweat here anyway and although the handicapper will hit him hard for this win, it looks as if he'll have no issues running his race at a higher grade. For now, it was nice to get a winner and on we go.

Lexicon Lad was also well-punted in the market (10's into 5's) but unfortunately he ran into what proved to be an exceptionally well-handicapped Paul Nicholls trained animal and that, as they say, was that. His usual foot-perfect jumping wasn't fully on display but he ran a good race to finish 2nd and you'd have to imagine that connections will be dropping him back in trip again. In the meantime, he's one to keep an eye on for a while (nicely handicapped imo) and there'll be a nice race in him at some point in his career.

Such an impossible day of racing ahead. The quality isn't atrocious but as a betting medium, it's exactly that and I've only been able to find one relatively short-priced selection, albeit one that I feel should be shorter again. He's no sure-thing, far from it, but he should put up a brave bid and hopefully will go on to land the spoils. It's a 5f sprint around Lingfield though, so don't be shocked by any possible goings-on!

A fairly trappy contest in which chances can be given to many but Noble Storm is the most appealing to me at the moment and given how I expect the race to pan out, I would have thought that he should be around the 5/2 mark - which may seem crazy to some. That price is assuming that he's readied to run to his best first time up after a break but Ed McMahon is more than capable of getting them in tip-top shape and this 6-year-old horse had no problems in defying a break when carrying top-weight to victory on his seasonal debut last year (rated 102 at the time; was a hot-handicap and he won it with relative ease).

Being a big, powerful sprinter, Noble Storm is probably the type who improves for an outing but he has a rather sound record when fresh and I'm fairly hopeful that he'll have enough in reserve to win despite not being completely at his best. Some of the main contenders here are types that I wouldn't really expect to thrive over this C&D, although I don't have any evidence that they definitely won't and could end up being very wrong about that. This fellow is uncomplicated though and will bounce out, race handily, travel as well as anything (he has phenomenal speed; ideal for the track) and hopefully power up the straight to record career win #9. It certainly won't be easy but with nearly £19k up for grabs, Ed McMahon should have this speedy brute in good knick and 4/1 is rather appealing to me. A medium sized stake should be played.