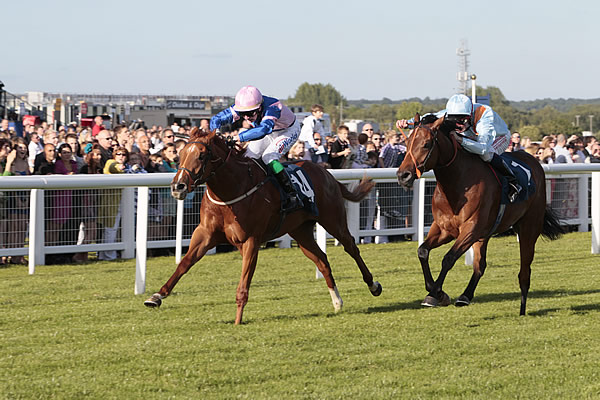 I can't say that I was too happy with how March was panning out, as we were on course to break even or make a small loss but such is the nature of this crazy game, Billy Red went on to pretty much ensure that it'll go down as a very decent month in which a profit has been achieved. The race didn't pan out as I had expected it to and my selection stumbled after leaving the stalls and couldn't get to the lead (never won on the all-weather when not making the running). That was enough to make me think - during the race - that he wasn't going to have much of a say in proceedings but he was given a cracking ride by his regular pilot Fergus Sweeney and found plenty for pressure in the home straight. It was his tenth career success and a most deserving one as well. It goes to show that you should always think well outside of the box when looking for value as this was the same horse that the formbook says was beaten over 16-lengths on his previous outing, but looks are deceiving and making excuses once again paid dividends. More please!

Another crap day of racing and we have to wait until near then end until our only bet will be running, which is annoying! It's another risky one in which I can't be too confident of anything but he is a 12/1 shot and looks overpriced to me. I think he's worthy of support down to around the 7-8/1 mark. The market should certainly indicate our chances of success, as not many Clive Cox horses will be left un-backed if they're fancied. Here's hoping that he'll run a big race and best of luck if you're getting involved with anything.

There's a fair chance that the unexposed Colour Guard is thrown in here off a mark of 85 (due to go up to 90 on Saturday) but I'm not willing to agree that 5/4 reflects his realistic chance of victory in what is a very decent contest, so he's worth opposing. The game, front-running Den's Gift is the one I fancy to run well at a nice price and his chances would be dramatically increased if getting his own way up front - which is a possible, but far from a given. Clive Cox's 8-year-old is a really hard horse to win with and hasn't landed the spoils for nearly 2 years, but it certainly isn't through the lack of trying. He's so, so very game and his recent form is quite good I think, more than good enough to see him put it up to the short-priced favourite.

Den's Gift ran a very creditable race over C&D - when finishing 5th of 9 - on his last outing over 6 weeks ago. On that occasion, under the guidance of the inexperienced 7lb-claiming Ryan Tate, my selection for today's race ran within a few lengths of George Guru, a horse who has since won so very easily off a 6lb higher mark and the overall form of the race is quite solid. I thought that Cox's charge probably went a bit too hard in front and thus didn't get home as well as looked likely at one stage but if he did, he wouldn't be a 12/1 shot here. Lucy Barry hopping back into the saddle is no bad thing either, as she got a fine tune out of the horse on his penultimate outing and she's quite a good judge of pace for an inexperience claimer.

There has to be doubts as to whether Den's Gift can win off his current rating of 78 against a field of potential improver's but I think that there's plenty of encouragement to be had from his pair of outings this winter and surely he'll get a deserved victory before too long. As with the majority of the selections that I go for, he's a bit of an "all-or-nothing" type and any sort of performance wouldn't really surprise me. Clive Cox is a wonderful handler though and I'm sure that he'll have this fellow spot-on on the back of his fairly short break. Taking on Colour Guard is the right thing to do at the current prices and with him being so short in the market, I think that the value bet of the race is almost certainly Den's Gift. As I say, I'm not sure the race will be run to suit but backing 12/1 shots like this leaves plenty of room for error in the long run and I'm happy enough to take another small/medium sized punt. He should run a very big race if all goes well.