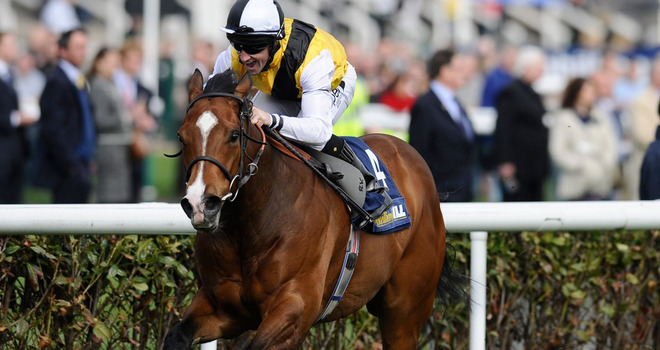 Den's Gift gave us a cracking run for our money on Thursday but just wasn't good enough on the day. He would have been 2nd if he didn't go off so quick but wasn't going to beat the winner regardless. Seeing how tough he is to win with, it'd probably be wise to avoid punting on him again any time soon but he's usually underrated in the market and I'm sure that Clive Cox will find a winnable opportunity for the horse before too long. This was a fine run and it's just a pity that I didn't lay off in-running, as he hit even money!

Well the turf flat season is back in action and this is the point where I'm hoping it will get very interesting again, although the first few months of this year have been quite kind in any regard. I was hoping to have a nice few low-stake selections today but I've only managed to find a pair, both of whom run in the trickiest races of the day. We'll be doing well to come out of today with a winner but who knows and there's not too many points on the line. I just don't want to go mad at the start when horses are making their seasonal reappearances and there's not much form to go on, because we'd end up having to rely on a hell of a lot of luck. It should be fun anyway and here's hoping for a victorious return. Have a very good day folks.

I absolutely love big-field handicaps but it's very hard to get the value in them when there's no recent turf form to work off and being cautious is the right approach for a while. First Post is the one that's catching my eye in this ultra-competitive 22-runner field and he looks to be nicely overpriced. There's no doubting that Derek Haydn Jones' 5-year-old is a tricky customer and he has let me down for some big pay-days in the past when throwing away his chance of victory by hanging violently to his left, something that he does on regular occasions. Regardless, he looked a lot more straightforward when running a very big race at Wolverhampton just over a couple of weeks ago. On that occasion, he finished 3rd of 9, beaten by just over 2-lengths and it goes down as quite an encouraging run, one that he should improve upon.

Today, he's 1lb higher now reverted back to turf but the drop to a mile is ideal and the likelihood of getting a solid gallop to run at over this straight course only goes to enhance his chance even further. He has a bit of an exposed look but he's generally consistent and always seems to hold a bit to himself, so I'd be fairly confident that he has a win in him off his current rating of 86. Whether it'll come in this race depends on numerous factors, not least the draw. Stall 21 should be a nice sit for him given how I expect this race to pan out and overall, he's just too big at 22/1. The excellent Shane Kelly hopping up for the first time is another positive and a minimal sized win stake should be played. Landing on the winner of this race won't be easy but First Post should give it a mighty good shot if all is well, and he doesn't hang violently left!

I won't be winning any prizes for originality by siding with Eton Forever in this contest but sometimes the value lies in the blatantly obvious and that may prove to be the case here with Roger Varian's 5-year-old. Having lined up on just 8 occasions, it's clear that this well-bred animal is unexposed and open to further improvement, but it's also clear that he isn't the easiest to keep sound. Reports of an uninterrupted prep are certainly encouraging and although carrying 9-9 and being rated 103 makes things quite tough, this relentless galloper looked like a Group horse in waiting when routing the opposition in last years Spring Mile, which is run over this C&D. He was rated just 92 when running out a near 4-length victor in that race but he seemed to have any amount in hand and I can't imagine that his current rating is an issue.

After winning on seasonal debut last year, Eton Forever failed to win on his following trio of outings. I feel that he had valid excuses for all of those, not least when he was 2nd over C&D in September on what was his most recent start (race turned into a sprint; he needs a pace to run at). I would be surprised if today's race wasn't run to see him perform to his best and it's just a case of whether he'll be inconvenienced by the draw, as stall 7 mightn't be ideal. There seems to be enough pace around him to suggest that he'll get a toe into the race at least and if that's the case, he should get a good crack at landing the £62k prize. 6/1 is hardly an amazing price but he looks the most likely winner to me and still offers a bit of value at the current odds, so I'll chance a small/medium sized win bet in the hope that he can go on to win. Usually a Group-class animal will rise to the top in this sort of contest and Eton Forever could certainly be one of those if he stays sound. At least he will love the conditions, has no problem with the track and goes well fresh. A bit (or a lot!) of luck will be needed now and hopefully that'll be enough to see him run a big race.