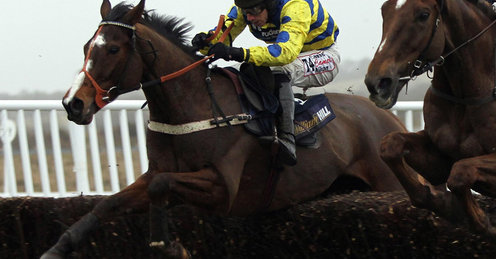 Betabob ran no sort of race at Newbury yesterday but having drifted to over 45/1 on the exchanges, that hardly goes down as a surprise. He was tenderly handled, didn't jump well and was never put into the race to have a chance of winning, although he wouldn't have beaten the winner anyway. I'm going to keep a close eye on him from here on in and I'm sure that there's a handicap in him during the Spring months. This run may just have been needed on the back of a couple of months off the track and it's quite easily excused for various reasons. Backing losers isn't fun but at least he didn't come second I suppose!

Just the two selections for today. It's not really an awe-inspiring Saturday unfortunately and both of my picks come with plenty of risk, more than usual I'd say. Hopefully they'll run well and it'd be lovely if one could do the business. Have a good day folks and it won't be too long until we'll be playing a lot more.

This race is a bit of a head-scratcher but Blazing Bailey is temptingly handicapped and I'm going to take a chance, as his price looks a few points too big. Alan King's likeable 10-year-old clearly isn't the horse that he was over hurdles but he's more than capable of winning off a mark of 142 at this level and should run a lot better than he was on his last couple of outings, as the track/trip/ground combination is much more suitable. It is also a nice little step down in class and he returns to the scene of his best run this season, which came in the Hennessy, over C&D, in which he shaped really well on his first outing of the season (off 9lbs higher). It obviously hasn't went to plan for the horse since but the long-distance slogs that he had to endure last twice wouldn't be what he's in need of and this more conventional assignment could help to spark a revival. That's what I'm pinning my hopes on anyway and further encouragement can be taken by the form of Alan King's yard, as they're going great-guns at the moment and the horse is reported to have worked well of late. There's no doubting that he comes with plenty of risk and the favourite - Paul Nicholls' very talented Niche Market - may be a hard horse to beat off his mark but 11/1 is just too big about Alan King's charge and hopefully he'll prove worthy of having a small/medium sized bet on.

A very tough race to call and although I should probably leave well alone, Mad Max looks worthy of support at his current price. This former Nicky Henderson trained 10-year-old hasn't come close to winning a race for nearly two years now but the last race that he won was a novices' Grade 2 and he could be very nicely handicapped off 150 here if improving for his recent seasonal debut. That was his first outing for his new trainer, Neil Mulholland, so it may have been somewhat of a fact-finding mission and I think it was a very encouraging outing given the fact that the really testing, heavy ground at Haydock was not to his liking. He did travel very well under the hands of Dougie Costello before blowing up in the home straight and I'd imagine that there was plenty of work left to be done with him, and you'd expect that he'd improve a fair amount for having had the run. The flat, galloping nature of the Newbury track is right up his street and he's actually 3-3 at this track, albeit in a pair of bumpers and a novice hurdle. Returning him to this course in a race to be run on very decent ground looks like a great plan and he could well out-class the lot of these if he returns to anything like the force of old. Whether he will or not has to be the very big worry but conditions are spot-on and 8/1 is a couple of points too big, which is all that matters at the end of the day.