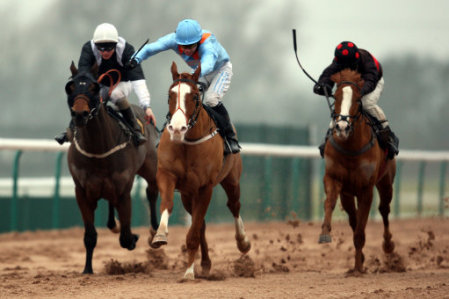 Saturday was a fruitless attempt as Blazing Bailey put in a dismal performance, one that has led to him being retired from the game. There's not much I can say apart from the fact that he seemed to have little interest in partaking in the race and King says that he has fallen out of love with the game. It's a real pity but at least I won't be tempted to back him again and lose more money!

Mad Max, who was the only other selection, was a non-runner and is one for again.

Just the one selection again on what is an awful day to be punting. It's awfully frustrating at the moment and after spending numerous hours looking at the Supreme yesterday (write-up in the Cheltenham section), the Betfair market is suggesting that my selection is going to be a non-runner. That's no problem as it's a "non-runner, no bet" selection but it's awfully annoying. If it happens that he doesn't turn up, I'll have my second-best value bet posted up as soon as I know what the plan is.

Oh well, hopefully today's bet will run a big one and have good day folks. It's just not our time of year unfortunately and although we're not exactly winning money at the moment, we're not losing and that's important too, as I'm sure that if I was getting involved and having numerous selections when the crappy racing is on, I'd be losing. Once the flat's back, which won't be long now, there'll be plenty more activity.

There's no doubting that Dancing Freddy is a hard horse to win with but he has a pretty faultless attitude and in a race where the pace is likely to be frenetic, he may be able to keep going for the longest whilst the rest have cried enough. I had thought that this would be the case when I selected him to do similar at Wolverhampton last time out but he ended up making the running and possibly went off a bit too quick for his own good, even though some good judges say that he didn't and had went a relatively sensible pace. Regardless, he put in a fine performance to finish in 3rd place, beaten by just three-quarters-of-a-length and wasn't caught until very late on in the show. It's clear as day that he's in very good condition at the moment and although he hasn't won for quite some time, I feel that his next victory is imminent given how nicely treated he is off 71. It is his last, and highest, winning mark but he has plenty of form in the book suggesting that it's very workable and hopefully he can take advantage today. Backing any horse at Southwell comes with risk but he stays well, has plenty of speed and should be suited to how this race pans out, so 6/1 looks to be underestimating him somewhat. Small/medium win stakes will suffice as I don't like getting heavily involved in races like this but he should give it a good shot with William Carson on board again and hopefully they'll do the business. Shawkantango (5/1) should go well again too.