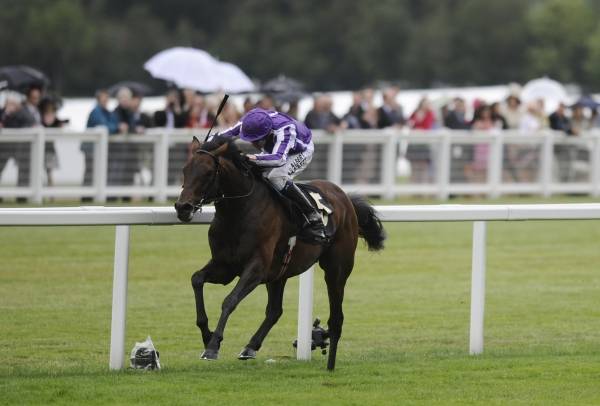 Robemaker was well supported, with the step up in trip anticipated to see further improvement from him. Some of the judges on RUK claimed that he didn't get home on the ground, but that's nonsense and he was quite simply out-sprinted in the home straight. The way in which he travelled hinted he was going to play a part in the finish, but the field were taken along very steadily and that's the opposite to what he is in need of to give best. There's no doubt in my mind that he would see out a truly run 1m 2f, even on testing ground and all he'll need to prove that is a nice toe into the race. It would also help him to settle, because he over-raced in this and you aren't going to get away with that, especially when the race develops into a sprint. It wasn't a bad performance from him, but he's certainly capable of a lot better at some point soon.

The weather is really hampering things in one way or another. Yesterday's selection was inconvenienced by a couple of potential pacemakers coming out of the race due to the ground and such goings-on would wreck your head, and ruin your betting plans. It looks like we'll be putting up with it for a while longer and here's hoping that we can find a few things to take advantage of, as some surprising trends are going to pop up at certain meetings and the simplistic form will be rather deceptive. That suits me perfectly due to my liking of strange angles and the more excuses that are laid out on a plate for a potential bet, the better.

I seem to say this pretty much all of the time, because I've got a lot more cautious this year, but winners will be hard to come by today and I wouldn't advise that anyone goes head-first into any bet, even if you're really confident. The two that I've picked out are good bets I think, even though they'll need plenty of luck to win, such is the nature of Chester's racecourse. Market movements for either would be a massive plus and fingers crossed that one of them could oblige. Best of luck today folks, hope you nail a winner or two.

Dr Marwan Koukash looks to hold a very strong hand here, with 4 of this 10-strong field representing his ownership. That makes finding the right horse very tricky, but Pintura is the value call with the underfoot conditions being likely to help him more than most. The main problem that this 5-year-old has got is his sheer consistency in top-level handicaps, which is admirable but means that the handicapper is very slow to relent even when he runs below-par. The assessor is certainly giving him a chance this time around though, because he has been dropped from a mark of 99 down to 92 for a trio of modest performances (the first came on the all-weather). The way that some of David Simcock's horses had been running may explain why this one hasn't been at his best so far this year and hopefully he'll prove capable of bouncing back to his best, because he'd win this if he did. Indeed he finished a head-second in this race last year when coming into it in top form (beaten by Kyllachy Star; who is too short for my liking at 3's here) and I'm hopeful that today's conditions will help him to better that result. Being drawn in stall 3 will help, as will the likelihood that the race will be run to suit and Jamie Spencer being on board is no bad thing, as long as he doesn't try any of his famous Hollywood antics. He's a fantastic jockey, a real joy to watch when he is on form and he's the main man for Koukash, so hopefully it'll transpire that this is their main hope. 6/1 is a cracking price for as long as it lasts and playing a medium sized stake looks to be the call. All going well, this horse should run a big race, at least, and is capable of getting a deserved big handicap victory.

Result - Winner @ 9/2; Finally got what he deserved. Really good effort.

One Scoop Or Two is regularly seen whizzing around Chester and it's a real pity that he hasn't got a more favourable draw. Reg Hollinshead's 6-year-old will have it all to do if he's going to land the spoils from his sit in stall 10, but he is priced very attractively and taking a chance looks to be worthwhile despite the quite obvious hindrance. Graham Gibbons is as tactically astute as they can come and if anyone can overcome poor draws, it's him. I don't think that they'll have to work too hard to tack over, so that'll help. It's annoying that there's the presence of April Fool, because he's a speedy sort who's likely to go off in the lead and I'd like to see my fellow taking them along, but that's unlikely to happen. He doesn't mind getting towed into a race though and should be finishing out his race quite well on the back of what should be a decent gallop. His last win came off a mark of 78, so he's not obviously well-treated off 84 here but was a progressive sort last year and has the scope to find a bit more. The ground certainly won't inconvenience, it'll actually help him more than the majority and I wouldn't be surprised to see the market moving to speak in his favour, because he has plenty to suit. Dropping back in grade will help too and although it'll be far from an easy task to win this race, he's a worthwhile bet at such a price. Bear in mind that this is his first run of the season, but Hollinshead can get them readied and this one has went fresh in the past, so there's hope to be had in that regard as well. The usual stakes will suffice and a big run is possible if he gets some luck.