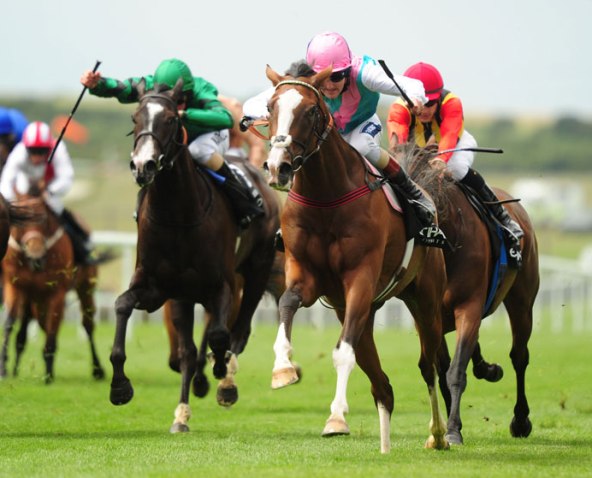 Secret Witness doesn't win too often but he certainly consented to do so when scoring decisively in the big 6f sprint at York yesterday. Although the official winning margin was a half-length, he was value for a couple more at least if he hadn't have pulled himself up in-front. We were damn lucky that the runner-up wasn't able to get there in time, as it would have been gutting and blatant robbery! It was a career-best performance from him, on turf at least, and it'll be interesting to see if he can win another nice prize. He's capable when on-song, but you just need so much luck to win one of these races and he hasn't been the most fortuitous in recent seasons. Thankfully he was able to prove that the 16's about him were very big.

Both Labarinto and Sirius Prospect ran no races at all. The less said about those, the better. Shocking.

A trio of selections for today's racing and again, I can only advise the usual stakes due to the toughness of the races. All we need is one to pop up and it'll be a good day, so hopefully that'll come to fruition and help this month to continue on the right track. June was my best month of the year in 2011 (125pts of profit) and although it would be sheer wishful thinking to expect (we can hope!) that I'd hit anything like that again, I'm much more comfortable betting at that time of year onwards - mainly due to form settling down somewhat and trainers' intentions being a lot easier to read, thus making my job a lot simpler to do (less non-triers!).

Things should get interesting for us in the next couple of months, with more confident bets being likely to be advised and hopefully we'll be laughing all the way to the bank. I went on a massively long losing run at the start of last years flat season (still managed to get a 33% yield and 235pts profit) but this time around the "advised" price profit is already +88.50pts (SP profit is +56.50pts) and we're going about everything the correct way. Be patient, don't chase losses and quite simply, you will win in the long run. That's all that is of importance in this game. Playing the right price is king, not playing simply for winners. Any person can pick a winner - not too many can pick the correct prices to ensure success in the long term and if you can come about to the right way of thinking, and leave out the silly "interest bets", you'll be a joy-filled punter!

Why am I saying all of this stuff? I have no idea. I just ramble and it makes sense to me at the time. I also like to think that I can convince the recreational punters to change their way of thinking and whilst there is plenty of you who are shrewdies, there's also some who will massively increase their chance of making some dough by accepting that the patient approach is the only way to go about this game. Losing ain't fun.

Have a good day folks and keep the fingers well and truly crossed for another winner, or two, or three!

Plenty of the runners lining up for this 6f handicap are of interest to me now and throughout the season, making the decision of who to side with a lot more difficult. The pace is likely to be furious throughout, so you're going to need a horse who will be able to keep with them before finishing it out quite well and the one that I've marked down as being the most likely contender is Doctor Parkes. Eric Alston's 6-year-old doesn't have the raw ability as some of these, nor is he as unexposed but he's a very tough animal that's capable of winning at this level when there's enough aspects in his favour. Things just didn't pan out for him at Chester last time out, on what was his seasonal reappearance (goes very well fresh). Being sat out in stall 11 was a massive inconvenience, as was getting caught out wide for much of the race and the fact that he could get within 4-lengths of the winner was more than enough encouragement for me as to his current well-being. The soft ground that he encountered that day was the opposite to what he wanted and although today's conditions aren't exactly ideal, they're a lot better than Chester's were. Overall, it's an effort that needs marking up somewhat and the horse should improve for having had the run as well. His mark of 92 won't be easily overcame (3lbs higher than last win), but he is 1lb lower than when running the future Group-class, trailblazing Masamah to a half-length over today's C&D nearly a year ago (in a better race that this). That was the last time that Jimmy Fortune was on board and to see him back in the saddle is a big positive, as he is one of my favourite jockeys (1-32 record over C&D is a little off-putting mind). The pair are very well matched and winning a race of this nature won't be easy at all, they look to have a lively chance and 8/1 is on the large side. If the horse brings his best, he will run well. The usual stakes are all that I can advise in a race of this nature though. Of the rest, Ancient Cross (14/1) could hit the frame too.

This sort of race would be of no interest to me more often that not, but Timepiece looks overpriced to give Sir Henry Cecil successive victories in this contest and taking a punt on this 5-year-old mare looks like a worthwhile venture. A few of these are very hard to split, but with the favourite being rather underpriced (in my opinion), there's decent value to be found elsewhere. Cecil's charge is the only Group 1 winner in the race, a victory that was achieved in the Falmouth over a mile at Newmarket last year. She is rather flattered by the win, as she was always well-placed in a steadily run race and managed to get first run on the 118-rated favourite. There's a chance that we'll see a similarly run race today (which suits) and the 2-furlongs extra that she'll be travelling today could even help her to step up on that run, although some of the others will also appreciate a slowly run race. She will have to step up markedly on her reappearance run, which came over 1m 1f at Newmarket. Today's favourite, Izzi Top, was over 6-lengths ahead of her but Sir Henry will certainly have left some of her back at home that day and I expect that we will be seeing a much better performer this time around. She was easy to support that day and just seemed to tire on the ground after trying to work into contention on the outside, which is understandable really. The ground will be better this time around and that will be a help, as too will the fact that she comes here on the back of a run; didn't last year but still ran really for a long time, before bowing out of it inside the last couple having been too fresh early on. She's a tricky mare at times, but ultra-talented and supporting her in this is the right call at 6's.

Result - 8th @ 7/1; Shocking performance. Showed nothing. One to avoid.

Drift And Dream was a filly that I marked down as one to follow throughout last year but unfortunately she only made the track on four occasions, due to having had some problems, and never got to show her best form. That handicapper has given her a nice chance though and it's interesting that Chris Wall is allowed to keep this 5-year-old filly in training, with an audacious attempt to get her placed in a fillies' Listed race being the likely aim. It sounds a bit crazy, seeing as she's now rated just 75, but her last pair of outings in 2010 suggested that she could make up into a very useful sprinter and she could still do it if her problems are now a thing of the past. She didn't make her reappearance until August of last year, so it is a positive that connections have managed to get her out in the earlier part of this season and it'll be interesting to see how she'll get on with a trouble-free run at things. The best of her form has come around Sandown over 5-furlongs and she was so unlucky not to win there on her final run of 2010 (was repeatedly denied a run through), when rated 82. Being drawn high over the minimum trip around Sandown is usually a deal-breaker from the off and seeing how well she ran despite it leads me to believe that she was going to be a 90's performer at least. The race was a long time ago, but not too many runs ago and we haven't got to see the best of this horse since then. There is the possibility that she will be in need of the outing but the way she travelled on unfavourable ground on her seasonal debut last season would suggest that she may not have any issues with going well first time out, assuming that it was the soft ground that was the beating of her that day (I think it was; plus she was strong in the market, indicating that she was expected to be ready). It's also interesting that Chris Wall is pitching her into a 0-85 handicap when she is rated to play her hand in much easier assignments. Either she's working really well and expected to run a big race or else she'll be in need of the run against superior opposition, causing her to be a nicer price next time out and thus making her "gamble material". The market will tell us all we need to know, but with the ground to suit and a stiff 5-furlongs playing right into her hands, along with what should be a rapidly run race, she's worth taking a chance on. The usual stakes apply again and hopefully she'll be on the job.