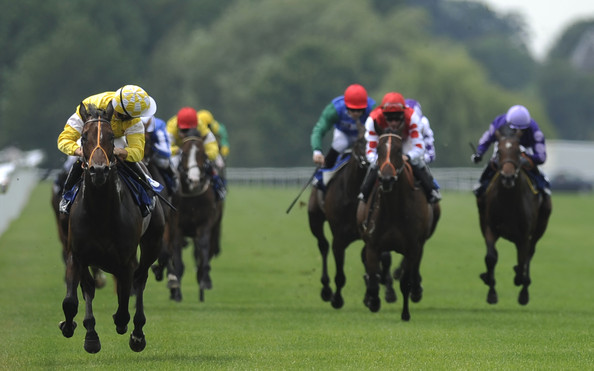 After the sun comes out, the rain usually isn't too far away and unfortunately the previous good luck did not follow on, which is often the case. Doctor Parkes fared best of our trio and stuck on well to finish in fifth place, not beaten too far at all. I had considered the winner quite strongly but decided that I would let him go due to the likelihood that he'd be taken on badly for the lead, but the main runner that worried me never went near the lead. Due to that, the possibility of the pace collapsing was lessened and as a result, our selection could never force his way to the front at any point. He ran a really creditable race all the same, is clearly in fine fettle this season and remains one that we'll keep on our side. Quicker ground will help him.

Timepiece never showed up at the races and was a massive disappointment, so much so that I can't find a single excuse as to why she performed so dismally. Connections are said to be considering her future now and it looks like she'll be heading off to the paddock. To be fair to the winner, she has proved to be a lot better than I thought she could be and I just called the race all wrong, regardless of how our mare ran.

Chris Wall said before the off that Drift And Dream was going to be in need of the outing but that's a load of nonsense and she was ridden with kid gloves by Ted Durcan, who is average but usually not that bad. I'm quite used of backing horses who are just out for a jog, but it's so frustrating when they're as obvious as that one was. Everything in that race was lined up to suit her but connections have their eyes fixated on another day and we'll have to wait until then to see if she'll be a betting proposition again. Oh the joys, eh!

Just in case anyone's wondering after reading the following, I'm not intentionally going for massive priced runners. I will play any price that I think will see us win in the long-run and it just happens that all of today's are fairly large in that department. Obviously, that lowers our chance of landing on a winner quite largely and it would be considered a surprise if we were to get one, but they're all good value and who knows, we could get the bit of luck needed for one of them to pop up. If we do, we're laughing. If not, it'll be frustrating but that's how she goes. Fingers crossed that one can oblige and have a good day folks. Sadly I have got nothing concrete to offer but the only races worth playing are the handicaps and they're all gigantic fields.

This handicap looks to be as tricky as they come, but Crackentorp could be a lively one at a price if he is wound up on what will be his seasonal debut. Tim Easterby's 7-year-old gelding may well be up against it off a mark of 91, 4lbs above his last winning mark, but he clearly enjoys spinning around the plains of the York track and has won on his last couple of outings here - his only victories on turf. There's no doubting that he should have won more often, considering that he has plenty of ability and his hit-and-miss nature makes him a risky proposition at the best of times. I do, however, think that he keeps plenty to himself and when getting his conditions and a race run to suit, he can land another nice handicap off this sort of rating. The likelihood that this race won't be run at an overly generous clip might inconvenience him. At least he'll be able to get a nice, relatively prominent position from his sit in stall 1 and that will be a big help if it does turn into a bit of a sprint for home. Indeed his last win here came in a race that wasn't truly run and that is encouraging enough for me, even though you never know how this sort of animal will react to the situation. Deauville Flyer is an old "friend" of mine, one that has never managed to get his head in-front when I have backed him and he looks to be the Easterby stables main hope. If it does turn into a sprint, he'll have little to no chance unless ridden more forward than usual and the odds (9/1) make him a risk not worth taking. Tim Easterby holds a better chance with Crackentorp I reckon and he reports that the animal is "in great form, loves the course and will enjoy the ground", which is good to hear. The fact that he comes here not having had a run would worry me a bit, but he has run well enough when fresh in the past and sometimes it's worthwhile just taking a chance with regard to fitness. 20/1 makes him worthy of support and although some nicer handicapped animals could scupper any chance that he has, they're far too short for my liking and I wouldn't be surprised to see one of the more exposed types take this. The usual stakes apply again.

Richard Hannon is right up there as one of my favourite trainers and he looks to have a bizarrely priced runner here in the shape of the 4-year-old Reflect, a horse who has some cracking form in the book. It's possible that I am going mad, but I fail to see how this colt can be so big in the market considering how good he can be on his day and how completely unexposed he is over this trip. He has literally never run over it, having lined up over 11 & 12-furlongs in all of his outings last season, shaping on more than one occasion like he needs to be brought back to 1m 2f. Today, he gets exactly that and a first-time tongue-tie is in operation as well, to help with his breathing I assume. Brown Panther ended up being a potent force last season and my selection for today's race finished within 2-lengths of him when that one was rated at just 81, and clearly a handicap blot. If the same horse can be seen in action today, I've no doubt that he'll outrun his odds at the very least and after that, who knows. Reflect disappointed in a couple of runs after that in 2011 (ran well once in between) but strongly hinted that he retained all of his ability on what was his seasonal reappearance at Kempton in March - when tackling a tougher race that this. On that outing, over 1m 3f, he was very strong in the market (9's into 5's) and looked likely to play a hand when moving into contention just over a furlong from home. Unfortunately for those who backed him, he went out like a light and that was possibly down to being too keen through the early stages. There also may have been an issue with his breathing now that we're seeing a tongue-tie applied, so plenty of positives can be taken out of it. Dropping back to 1m 2f at this stiff track will help, as will the quick ground and he will be getting a race run to suit as well. Pat Dobbs being on board must be the main reason for the price, because I can't see much justification for it and although the horse could easily disappoint, he has to be a bet now down in grade. I'm tempted to play more than the usual stakes but there'll be plenty of reward if he could go on to win and hopefully he'll put up a big performance. Even if he doesn't, he is the complete wrong price. If I could spot one of these bets every day or two, I'd be a massive winner in the long-term. It's just bizarre.

Maverick has run well on all five occasions since joining Ralph Beckett's operation and has to scope for further improvement over this longer trip if he can just settle into a rhythm. That is likely to be the biggest problem, as this 4-year-old gelding is a bit of a lunatic and always wants to go faster than his jockeys will allow him to. This may look like an utterly stupid selection after it has ran, but I can't let him go unbacked at such a price over a distance that I'm convinced he will excel at, if deciding to settle in his contests. His latest run came in the ultra-competitive Spring Mile at Newbury, in which he pulled for a little while before calming down into a lovely rhythm and I actually thought that he was coming to win the race at one point in the last couple of furlongs, at which stage he was travelling so sweetly. The testing ground seemed to put an end to any hope that he had and he was done for toe once put under pressure. Despite being a rather temperamental sort, he doesn't lack for a willing attitude at all and when the going gets tough, he's well able to battle (was very game when beating George Guru over a mile at Kempton - that horse improved over a stone on the all-weather afterwards). This race is quite a way easier than the Spring Mile was and if the horse could just settle, I'd be rather confident of a big run. He may not, and could finish tailed-off, but the price-tag makes it a risk worth taking. The track will suit, the ground will also suit and the in-form Jim Crowley being on board again is a big plus (2-3 on him; although his recent record at this track is bad). In what is a wide-open race, taking a punt on this fellow is the right thing to do and hopefully he will run well.

Everything I'm selecting at the moment seems to either run really well or really badly. It could have been a brilliant day if Crackentorp won, but he didn't want to know until David Allan put down the stick and had he done that earlier, who knows. The other two were just poor, but keep an eye on Reflect. He is a lot better than that and just didn't seem to be at the races today for some reason. May need a flat track and a bend.