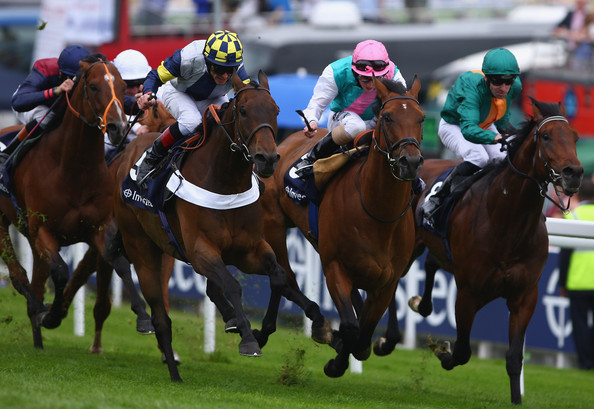 There is nothing worse than finding plenty of bets for a days racing and seeing them falter, slowly, one by one. The first of ours was Amazing Amoray, who was very strong in the market and that's an obvious plus given that he's a David Barron trained runner. I selected him on the assumption that he would be patiently ridden to get the stiff 7f but he set off in the lead, where he was a bit keen (also sweated up quite a bit). It looked like he would fade away when getting headed with a couple of furlongs left to go but to his credit he battled on gamely and finished in the places, beaten just over a length. If he's ridden with more restraint, a step up in distance could see further improvement and he's attractively handicapped at the moment. A lot will depend on what price he'll be, but he's one to keep an eye on and he will be able to win a race soon.

Bertiewhittle, another David Barron representative, was our next selection and he was similarly strong in the market, eventually going off as the 7/2 favourite. He was my most confident bet of the day and, typically, was the most disappointing. He failed to land any sort of blow and I'm rather baffled by the performance. It is possible that he was not racing on the best part of the track, although that may be clutching at straws a bit. The run was just so unlike him that we're going to have to put a line through it because I'm sure that he's a horse with scope for further improvement, with Ayr Gold Cup aspirations not being unrealistic. Soft ground, or at least softer ground may be a requirement if he's racing on a flatter track against this calibre of opposition and hopefully he'll get that at Ayr in September. Don't give up just yet, he's a useful sprinter.

Overnight rain at Thirsk put paid to the chances of Excel Bolt and resulted in him being unable to last the trip after showing very bright speed for most of his race. Despite previous problems with injury, his ability still seems intact and once the fast ground comes back out to play, he'll be able to show his true colours. He holds an entry for the Epsom Dash in a couple of weeks and depending on the ground, that could be a very interesting assignment for him if the downhill track proved to be no issue. That race should be littered with speed horses though and even if there's quick ground, he mightn't be able to get home there either.

When Hazelrigg is the horse that's left to save a disappointing day, you know that you've done a bad job and all he could do was run another good race without threatening to win. As per usual, he didn't seem to be helping his jockey very much once the button was pressed and that's typical of him really. He jogged on well in the final furlong when all hope of winning was gone but that's irrelevant I suppose! The single positive to take from it is that we got a nice price, as the horse was backed into 4/1 favouritism and must have been fancied by some. I will be leaving him alone in the future, unless he's a huge price in some big handicaps, thus making the obvious risks worthwhile. He's talented, but has never reached his potential.

Two selection for today's racing and both should give a good account if all is well. Hopefully one of them could oblige, but I seem to be a massive jinx of late and to be honest, nothing would surprise me! All the best folks, we'll be back to winning ways before long. A bit of good fortune certainly wouldn't go astray!

Backing any Paul Midgley runners comes attached with plenty of risk and I just hope that we're not landing on a dude here by siding with the progressive Another Wise Kid. This 4-year-old sprinter really helped to showcase his trainers skills by scoring on 4 of his 9 outings last year, when improving by over a stone in the ratings. The main aspect that he's in need of is a solid pace to run after and it should come to fruition if the usual forward-going runners don't change their tactics, which would be detrimental to our chances. I doubt that they will and at least that necessity is there to be exploited. The next problem is whether he will be trying, as he has a fairly lofty rating (83) and a victory in this sort of company could see him rated near the nineties, making things very tricky for the rest of the season. On the other hand, it would see him get into some of the bigger money handicaps at the main tracks and his owner hasn't had too much luck with the horses he's had down the years, so they may be happy enough to shoot up the handicap and let their runner take the next step. They come here on the back of what was a respectable seasonal reappearance at Doncaster, on ground that was more testing than the horse cares for. He shaped as if he'd come on for the outing and should be bordering on spot-on after it. Seeing as he's still lightly-raced and only entering his second season of running in handicaps, there could well be more improvement to come and he may well be able to make light of this mark once the penny drops. I'm fairly confident that he'll run a big race here and should the potentially "well-in" favourite fail to fire on all cylinders, Midgley's charge is the one that I expect to take advantage. 5/1 is a price that doesn't leave a lot of room for error, but it's slightly on the large side and a chance should be taken with the usual stakes. Master Rooney is one to keep an eye on as well, but he showed little to nothing at Beverley last time out and might be one for later in the season.

There should be a very strong pace on here from the off and the patiently ridden sorts are likely to be at a big advantage barring any strange goings-on. Ramona Chase is the one that catches my eye at the prices and Michael Attwater's 7-year-old should love how this race will pan out. The main issue with him is that he's as quirky as they come, and a win record of 3-61 only emphasises that point. He's extremely talented though and more than capable of popping up in competitive handicaps when he consents to put it all in, which will hopefully happen today. A solid pace to run after is exactly what he wants and it'll be even more suitable if it's overly solid, as I have no doubt that this fellow needs rivals to be coming back to him rather than him being forced to run them down. The way the race will be run is going to suit a few of the others as well, so it wouldn't be surprising if he found one or two too good as per usual, but those are too short in the betting for my liking and thus avoidable. Attwater's charge has run twice this year, once on the all-weather at Kempton and once at his beloved Epsom, where he so often runs well without winning. That run at Kempton was ultra-encouraging, as he was beaten little more than a length in a race that was not run to suit him (also raced wider than ideal). Today's contest is a lot less competitive and a lot more likely to be run to favour him, so there's every chance that he can step up on that form. His most recent outing, at Epsom, was a solid effort as well and the horse is clearly quite well in himself. It'll be tough for him to win this given his obvious issues in that department, but he's certainly capable and worthy of support at the prices. Nicky Mackay hops on board this fellow for the first time in an age and that's interesting too.