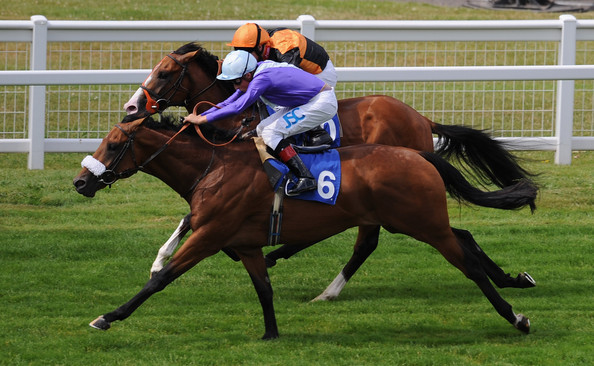 The perils of backing a runner in the gutter handicaps were there for all to see with Aine's Delight, as she drifted markedly before the off and was then held up in a detached last place throughout the race. I can't afford to get myself into trouble by saying what I feel about certain situations, but what was going on here was as plain as day and it's fairly sickening. I'm thoroughly used of losing bets, but I like to lose them on merit and there was no chance of that happening here. It's safe to say that I wish connections utter failure!

Some decent handicaps to get stuck into today and I've found a trio that are worthy of our cash. Again, I am not too confident about any of them but they're worthwhile bets at the prices and we just need one to poke its big head infront to make it a decent day. Hopefully that will happen and, as ever, have a good one folks.

12 runners are set to go to post for this competitive 7f handicap and hopefully there will be something to take them along at a good clip, thus giving Citrus Star a good chance of having a telling say in the finish. Chris Wall is a tricky man to predict, so what he will have planned for this 5-year-old gelding is anyone's guess. Regardless, if the horse is let run his race then he is bound to be on the premises at a C&D that he was successful over in July of 2010. He was a 99 rated animal on that occasion and won despite a couple of things going against him, which is proof of how useful he can be on a going day. Now obviously that was a long time ago, but he showed a similar level of form when sluicing up on his all-weather debut in October of last year, when rated 1lb lower than today. There's no doubt in my mind that he will be able to win on turf again off this sort of mark and it's just a case of when connections will have him going all out for the win (the market will tell us that). The booking of William Buick, a rare one for the yard, is interesting to say the least and there are only a couple of jockeys on the circuit that I'd have above him in my personal jockey rankings. Getting Buick on board is a big positive to this fellows chances and he should be spot on having had a blow at Pontefract a month ago. That's a run best overlooked in a pure form-reading sense, as he had so much against him that he couldn't even run a decent race - this is a lot more suitable. It is very possible that the favourite for this, Primaeval, could be thrown-in off his turf rating. However, he has it all to do before I would be convinced that enough of his polytrack abilities can be translated to this surface and I am going to happily take him on here on value grounds, with 3/1 being much too short. Chris Wall's charge is the best alternative at the prices and hopefully a big run is on the cards. The usual stakes apply.

It'll be pain all round if our previous selection Oriental Scot goes on to win this, but I'm not willing to take a price around the 8/1 mark about him for a few reasons, most notably the likelihood that this race just won't be run to suit him. That is not to say that he cannot win, but I'm jumping ship and hoping that Jeremy Gask will be rewarded for his long journey to Haydock, to have just one runner, with Prince Of Burma. This colt can be a bit of a headcase on occasions, but there's no doubting that he has an ocean of ability and he is often seen travelling through his races like a really good animal, one that will be able to see off a mark of 87 at some point on the turf. The majority of his impressive form has come on the all-weather, including all 3 of his career wins, but his staying-on 5th of 22 in the Spring Mile at Doncaster suggests that a quick surface on turf poses no problems to him. That was only his fourth outing on this surface, the first with his now regular blinkers attached and it was very encouraging, especially as I think that he's always going to prove to be a better animal going around a bend. He ran on turf on his next outing, over 1m at Nottingham, but that was on slow ground and he was caught out wide without cover throughout, so you can scribble a thick line over that one. His next, and most recent run, came back on the all-weather at Lingfield. Sadly for connections, he was badly hampered coming into the straight but still managed to run on eye-catchingly and again showed himself to be in good knick. Coming back to race on the turf won't bother him, as he's getting a quick surface to run over and a big run could be in the offing. Philip Makin is booked for the ride, his first for the yard and there's not many better men to have in the plate, although he isn't riding too many winners of late for some reason. At least this fellow is a lightly-raced, progressive 4-year-old who should have more to offer the game and he's the value call in a tricky race. Market support would be a big positive.

Another race in which the market leaders are too short for my liking and Astromagick looks like a viable alternative, despite this being her seasonal reappearance. Mark Tompkins' 4-year-old filly is lightly-raced, but exceptionally unexposed over this (2-mile) straying trip and is sure to have more to offer the game this time around. The main issue that has to be overcome is race-fitness, as she hasn't lined up to race since October and would be fully entitled to be in need of this outing. At the same time, I am very encouraged to see Eddie Ahern booked to ride because I'm a big fan of his and he seems to be on board "triers" for this yard whenever booked in the past couple of seasons. Ahern is on board a filly whom I expect to eventually make light of her current mark of 72 and if she's wound up here, it could well happen in this race. When last seen, she seemed to get stuck in the ground at York, in a race that wasn't truly run at all and it was an understandable defeat in my opinion. On her penultimate start, her first over 2-miles and after a couple of months off the track, she won cosily off 66, albeit in a nothing contest at Yarmouth. It was at least visually impressive and seeing as it was at a time when the yard were struggling for winners, it can be marked up somewhat. The quick ground that she will encounter shouldn't pose an issue and if there's a good gallop to chase after, the Goodwood track won't either. If there isn't a good gallop on and she's held up as usual, my confidence would diminish somewhat but the price makes it a risk worth taking. This animal will win a race or two this season and, with the yard in good knick and a solid jockey booking evident, hopefully it could be this one. It's a risky selection in many ways, but one that is worthy of playing the usual stakes on.