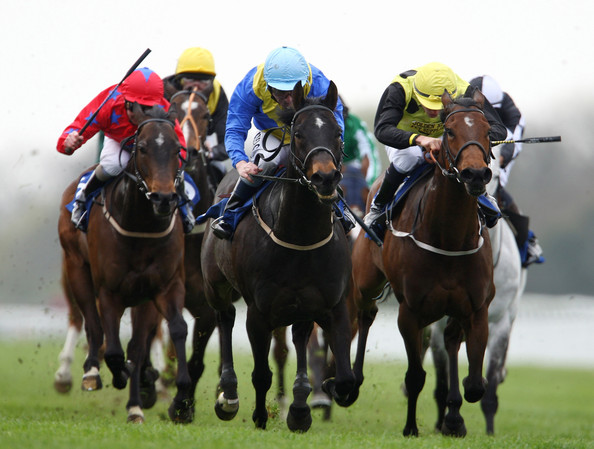 Gabrial got Saturday off to a flyer, showing a devastating change of gear to as good as sprout wings in the final furlong. Jamie Spencer gave him a fine ride and despite edging violently to his left, the horse still had enough in hand to win cosily. It will be really interesting to see how he progresses from this, because he is potentially very smart and will be even better once he settles down mentally. He'll be up to Group class.

Ante-post selection Elusivity found it all happening too quickly, which is understandable due to the ground ending up on the firm side. He kept on well in the closing stages and hinted that he is not a forlorn hope at this sort of level, so we'll be keeping him in mind for some of the bigger sprints this year. I will never back up over 5-furlongs again, unless there's plenty of ease in the ground at a stiff track. The track and ground combination just caught him out here and he could never get competitive, which is rather disappointing.

King Of Eden was next up but was a complete no-show from what proved to be a testing draw. This was nothing like his correct running and he seemed to get struck into in the early stages. He certainly ran as if something was amiss and you can completely overlook this performance. He will be winning quite soon.

Johannes was unable to get involved either and ran as if he will be needing 6-furlongs to end his losing run. Despite his age, he clearly retains a lot of ability and can take a nice handicap at some point this year.

The one that got away was Noverre To Go, who was very awkwardly away from the stall and keen through the early stages. Despite this, he finished off his race well to come home in 3rd position and connections will be very pleased with what was a clear return to form. Whether the first-time blinkers will have a similar effect again will be interesting but the horse should improve for the run and Ron Harris has another solid sprint handicapper on his hands. Hopefully we'll be able to catch him on his next going/winning day.

Vizean was fairly well-backed in the market, but couldn't get to the lead until around the halfway mark and was a sitting duck after trying to kick for home off the bend. She finished a respectable 3rd in the end and John Mackie will surely find a winning opportunity for her, but that's probably the last time we'll be backing.

Two selections for today. Again, there's nothing concrete but they're both in with a shout and hopefully can get involved in proceedings. Have a good day folks and lets close out what was a good May with a winner.

This is a really modest race and if Sairaam has no issues with coming into this on the back of a 73-day lay-off, then a big performance could be on the cards. Charles Smith's 6-year-old mare has managed to get herself beaten on each of her last 23 outings, which would normally be off-putting, but she's run many a good race in defeat since then and doesn't seem to have any mental issues. The main cause for having optimism is how well she can perform at the stiff Leicester track, as her C&D form (on fast ground) reads an obviously impressive (considering her modest levels of ability); 3-3-2-4. Indeed this mares career-best performance came over C&D in this exact race last year, when she was runner-up to a strongly-supported Gary Moore horse and 6-lengths clear of the rest, headed by today's short-priced favourite Copperwood. A similar performance would probably suffice here, as the winner that day challenged on a different section of the track and was probably favoured by doing so, thus leaving me with the impression that we should be upgrading the run of Smith's mare. It's quite clear that she's a very hard one to win with, but when the ground is going to end up like a road, she's capable of giving her best and today's surface is going to be road-like. A couple of her rivals are interesting, but not interesting enough to be supported at their prices and unsurprisingly that rules us out of getting involved. Sairaam is not an obvious winner and won't find it easy to win this, but she gets her conditions to suit and is attractively rated off 63. Cathy Gannon being  on board for the first time is an interesting one, due to her fine record at this track (5-19 when riding horses aged 4 or older) and she's riding really well since making her comeback from injury. The pair also have a good sit in stall 3 and look likely to get a race run to suit. At odds of around 11/1, this mare is worth a punt.

Windsor is usually the sort of track where I'd be favouring those who are on the pace throughout but with so many potential speed-setters lining up for this 6-furlong sprint, the winner looks likely to come from off the pace - unless there's a track bias of course. New Leyf is the one that catches the eye most and even though he has an exposed look to his form, further improvement is something that I expect from him this season. When the pace is likely to be furious, this Ed Walker trained 6-year-old will always be of interest to me over 6f and it wouldn't be surprising if he proved up to taking a nice sprint handicap at some point throughout the year. Since joining the Walker yard in the Winter, this fellow has run well on every occasion, including when putting up a trio of successive efforts that would rate amongst his best - all of which were at Kempton on the polytrack. None of those resulted in victory but he was beaten by no more than half-a-length on each occasion and was rather unlucky. His other outing came on turf in the Victoria Cup, run at Ascot, which is over 7-furlongs. That came on soft ground and he was also poorly drawn, so the fact that he was able to post such a creditable effort bodes well and the return to both a much quicker surface and 6f will be of huge assistance. Being drawn out in stall 14 is a hindrance and could lead to him getting beat before the off, but when there's so much pace on it may not matter as much and doesn't seem to do so in larger fields. His jockey's atrocious record at this track is none too encouraging, but a lot of the horses he has rode around here were not overly fancied and for that reason I am going to overlook what is usually a massive negative for me. Guillambert does at least do well when he's on board Ed Walker's runners and gave this fellow a cracking ride on his penultimate outing at Kempton. The horse also goes nicely at this track and has enough in his favour to suggest that he can do so again. Due to the nature of the track and race, the usual stakes are all that I can advise. I would, however, be very disappointed if this one doesn't go quite well. It will be interesting to see how Oneladyowner gets on, but he is far too short for my liking.