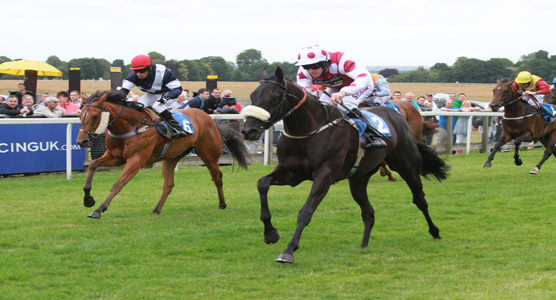 Sairaam got Monday off to a flyer, justifying good support by scoring for the first time in what must feel like decades to her patient connections. In the end, she only won by about an inch but had lost a shoe during the race and is probably value for further. Cathy Gannon gave her a fine front-running ride, as I had hoped, and they looked likely to score by a couple of lengths until the mare began to tire in the closing yards. That resulted in Frankie Dettori getting his mount into contention very late on but thankfully it was not enough to see him leave victorious. In ways this was a fortunate winner, but would have been an unlucky loser also!

Ed Walker's New Leyf was in need of a win at Windsor if he was going to have any chance of getting into the Wokingham at Royal Ascot, but unfortunately he fell short and just was not up to it on the day. Coming home in 5th place, not beaten far, represents a decent run and I'm still convinced that we haven't seen the best of him on turf yet. I'd like to see him run at Goodwood, although his style of racing is not exactly ideal for around there. He's a quirky character though and who knows what could coax him into giving his best.

Two selections for us today folks, although nothing stands out too much. They should run well at least and maybe one could do the job. Hopefully that'll happen and have a good day. Roll on Epsom!

This 5-furlong sprint is the most interesting race of the day and although it is rather competitive in nature, there aren't many runners lining up that you'd usually fancy in Class 3, 0-90 sprint handicaps. The most interesting member of the field is Tim Easterby's Medici Time, a rather exposed looking 7-year-old grey. He's a bit of a hit-or-miss character, but very useful on his day and is the one that I'd mark down as the classiest member of the race, so he has to be of obvious interest off his current rating of 84. Indeed that's the mark that he was last successful off, when coming from well off the pace over this 5f trip at Newmarket nearly 12-months ago. That win saw him follow up on another victory for the first time in his career and the common denominator with him seems to be a solid gallop and fast ground, which he will be getting here. Both of those wins came when he was turned out within a couple of weeks and although that might be a coincidence, some sprinters seem to enjoy quick turnarounds. This contest is coming exactly two weeks since his last outing, his seasonal debut, and that was an ultra-encouraging effort over a furlong too far at York. He shaped really well until tiring inside the final furlong or so, and seeing as he was sent off as a 50/1 shot, it was probably as much one could have hoped for. He has went well when fresh in times gone by, but that run is sure to bring him on and today's contest is a lot more suitable in any regard. The form of Tim Easterby's yard leaves a lot to be desired, as he's just not firing in the winners as he can. They've got a few winners in the past couple of racing days though and overlooking the bare figures might be the best thing to do on this occasion. Tom Eaves being booked again is an interesting one, as he seems to get on well with the horse and doesn't ride for this yard very often. Like the yard, he is not exactly firing in winners either but seems to be riding plenty of unfancied donkeys and is clearly a good man to have on board. The opposition aren't exactly bad, and a few are interesting to a point, but there's nothing that Easterby's grey should fear too much and he's bound to have a say in proceedings if he's on the ball for this. You'll never know beforehand with this yard, but Medici Time is enough of a price to make it a risk worth taking.

It would be quite a surprise if this was not an exceptionally well run race and that will suit Santefisio more than most, as this smooth-travelling 6-year-old looks to be in severe need of it to be seen at his best. The main issue with him is that he doesn't find as much off the bridle as looks likely, but there's no doubting that he has an ocean of ability and he's often seen swinging through his races, giving the impression that he should be laughing at his current rating of 85. Keith Dalgleish is the right man to have a horse with if you are trying to get further improvement out of one and this fellow has only been with the yard since the beginning of the year, turning out for them on three occasions. He was really well-backed for the first two of them, which came on the all-weather (7f at Kempton & 6f at Lingfield). Both runs were very good and he was beaten less than a couple of lengths on each, despite things not really falling right for him. The only reason that he's a double-figured price here is due to his latest run, which was his return to turf and on the back of a few months off the track. First off, the ground was on the soft side and that's just a complete no-go for him, as he really needs a quick surface to be at his best. The race wasn't run to suit him either and he was untouched in the market, which is enough to put one off any Dalgleish trained horse. With the run being likely to bring him on and today's ground conditions being a hell of a lot more suitable, I'd be very disappointed if he didn't step up on that effort significantly. The fact that he holds a Royal Ascot entry bodes well also and connections will have to get him to win a race if he is going to get into that contest. I might be making something out of nothing there but the likelihood is that he'll be trying to win this race and that's half the battle. Phillip Makin is an interesting, positive jockey booking and the ideal man to have on board a tricky animal such as this. He's riding an awful lot of losers of late, which is strange for him but as like Tom Eaves, not many of them have been overly fancied from what I can see. He has an excellent record around here though and will hopefully enhance it. 12/1 is a decent price & the usual stakes apply.