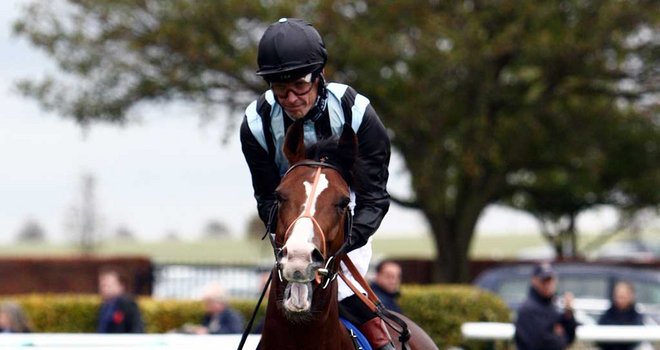 Worries about the draw hindering Oriental Scot unfortunately came to fruition, as he was caught very wide throughout the race and had to cover more yardage than anything else there. In the end, he ran a cracker to finish 3rd in a race that just completely destroyed his chances of giving best and even ignoring the fact that I parted with cash to back him, he comes out of it as the best horse in my eyes. Off his current rating, he will be winning races and it's just a matter of time. We'll be backing him again when conditions suit.

The last thing I wanted to see was Elusive Prince being friendless in the market and that's exactly what happened. For what reason, I don't know but can only assume that connections are trying to get him back down the handicap because he showed absolutely nothing at all. It's my own fault for thinking that they'd fancy winning this sort of race off such a high mark and that was just stupidity on my part. The horse is a lot better than he showed here, believe me, and he'll be proving it before too long in some decent races.

It should be a good days racing to say the least, but I'm finding it hard to recommend anything of much substance due to numerous factors making it really difficult. I've got 3 selections for us though and it'd be nice if one of them could pop up, preferably one of the bigger priced ones! It's certainly a day to play with caution and nothing would really surprise me, so I don't want to get involved heavily. Here's hoping for a bit of luck and have a good day folks. It'll be enjoyable to watch anyway and maybe a winner'd pop up!

Quite an interesting handicap in the offing here and I'm going to be unoriginal again by siding with the very talented 4-year-old Fury, who will have to show that he's a Group-class performer running in a handicap if he's to defy a mark of 104. On recent evidence, I believe that he is going to step up to graded company again before too long and hopefully he can give William Haggas his second successive win in this race. Being raised 5lbs for his latest run isn't a help but it's a thoroughly deserved rise in the weights due to what was a very solid quarter-length 2nd behind Captain Bertie, who was undoubtedly well-handicapped off 85. Being drawn in stall 21 proved to be my selections downfall, as he had to cover more yardage than most and it's not easy to compete at such a level when plenty goes against you. After coming with what looked to be a winning run, the eventual winner forced him to drift off to his right and that was very costly as well. Overall, the run would suggest to me that he can defy 104 without problem when the cards fall his way and if they do so today, he'll take all of the beating. 9/2 is hardly a mind-blowing price but he looks to be worthy of support once again given how much is in his favour and the usual win stake will do the job.

This doesn't look like a vintage running of the 2000 Guineas and opposing Camelot looks like the right way to go, as there's rarely any value to be found in backing hype. He may prove to be something special and it would be brilliant if he was, but the best-priced 2/1 about him just can't appeal to me in a race filled with unknowns. One of those unknowns is how good Bronterre could really be, because, for one reason or another, he hasn't shown his true abilities on the racecourse as far as I can make out. Whether he will get a truly run mile on testing ground at a stamina sapping track is beyond me, but sometimes it is worth taking a rather wild punt on certain debatable aspects working out in your favour and that's what I will be hoping for here. The ground is also an issue, one that caused him to under-perform in the Greenham a couple of weeks ago but Richard Hannon has gone on record about how pleased he is with the horses recent work and applies a cross noseband for the first time, something which he is expecting to have a positive impact. Jamie Spencer being on board this keen-going 3-year-old is no bad thing either and in a race where the market leaders look vastly underpriced, I'm happy to take a chance on this lively outsider doing the business. If he does stay the trip and shows that cut in the ground doesn't inconvenience, I'm fairly sure that he has the natural ability to run a big race and maybe it'd be enough to win. 33/1 is a tasty price and a minimal win stake should be played. Hopefully he'll give us a decent run at the very least.

Nothing gets my juices flowing more than a 5f sprint and this is one of the races that I'm most looking forward to today. Finding the winner of it is, however, a bloody impossible task and we'll need plenty of luck in order to see any sort of return. Andrew Balding's Night Carnation is the one that I'm going to plump for and not for the first time, as I've been a keen admirer of this 4-year-old filly's ability for quite some time now. Her main problem is that she's a temperamental nutjob who always wants to go faster than is ideal and that's not something that you're going to get away with in the sort of races that she has to compete in. However, when the penny drops there's no doubting that she's high-class indeed and I wouldn't be one bit surprised if she ended up competing with extreme credit at the highest level before the season is out. Her trainer has long said that soft ground is what she's after and today's conditions will be one of the rare occasions when she'll get exactly that. She got some cut at Bath last time out in a fillies' listed race but ran too freely to be seen at her best and ended up disappointing in 5th. It's possible that the run was needed as well and I can certainly say that she's way better than that run would suggest. It does lead to us getting a rather fancy price here and she should outrun it at the very least. On her best form - which includes an impressive win a Group 3 level on unsuitably quick ground at Sandown last year (although she was flattered) - she should prove capable of playing a hand here and hopefully that'll come to fruition. There doesn't look to be any excuses lurking and if she handles this tricky track, races with the choke on and gets some luck, I wouldn't be surprised to see her win. It's an awful race though and I urge caution!