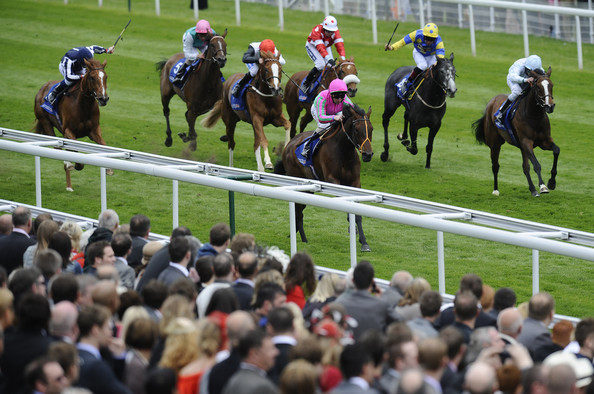 It's now time to give up on Fury because he's just in the grips of the handicapper now, which I didn't think before this race. To be fair to him, a solid pace would have helped him to perform even better than he did but things are going to be so difficult for him to land one of these big handicaps and he'll need plenty to fall his way if he is to do so. Given how consistent he is, there's rarely going to be value in siding with him and I won't be taking any short prices about him again. Connections must have an awful headache now, because it's clear that he's not up to Group level (I thought he would be) and is too high in the weights to hold off the progressive types in the big handicaps. He's so admirable though and deserves another win.

Bronterre was always going to be ridden pretty "dead" in order to get him settled and give him the best chance of seeing out the mile trip at Newmarket, but he hadn't a hope of getting into contention from so far back on that ground and ran below his abilities as a result. It seems as if a return to better ground is a must and dropping back to 7-furlongs will help too, so he'll certainly remain one that I want to keep on my side. This was an utterly poor showing, but it's very forgiveable and he shouldn't be judged too harshly.

Night Carnation ran a really encouraging race to finish 5th, coming home with a decent rattle having been hindered by the draw. My admiration for her ability has been on record for quite a long time and although the RP clowns are still saying that "she is ideally suited by faster ground", she will remain one to keep an eye on in big sprints when getting some cut. She's a real hit-and-miss performer, so we're quite likely to get nice prices about her and I'm fairly certain that George Strawbridge's filly will do very well this season.

It feels like an age since the last winner, which has been followed by 9 losers but we're getting on the right horses I think and at the prices we're playing, not too many have to oblige in order to see us in the black. It's 1000 Guineas day today but I'm leaving the race alone because I can't make head nor tail of it. I've found two selections in the handicaps at Newmarket, but they're tricky races and we will need a bit of luck to land on a winner. Both are having their first outings of the new season as well, so who knows what fitness and trainer/owner intentions will be. They're worthwhile bets anyway and hopefully one could do the business. Have a good day and fingers crossed that we'll be returning to winning ways before long.

I was originally quite taken by the chances of Godolphin's Anatolian and he should take a lot of beating on what will be his first outing with a bit of cut in the ground, which should suit to no end. The only problem I have is in taking a price around the 5-6/1 mark about a horse who is doubtful to see out this 1m 4f trip if there's a decent gallop, because his only experience over this distance came in a race that was run at an excessively sedate pace, which didn't test his stamina at all. He may be a pattern class performer running in a handicap off 97 but 1m 2f could well prove to be his trip and swerving him on this occasion is the call.

Rock A Doodle Doo has no doubts with regard to this trip when there's a good gallop in the offing and I'm hoping that it'll materialize, because it'd boost his chances significantly. William Jarvis' 5-year-old comes here with plenty of doubt surrounding him, as he hasn't seen the racecourse since the beginning of last August and it's more than possible that he's going to be in need of the run. He did run a cracker first time up last year though and Jarvis is well able to have his horses readied, and hopefully that will be the case today (recent yard form not too encouraging though). Rock A Doodle Doo is now rated 94 and although 5lbs higher than his only win (from 5 outings) last season, it's very workable based on how unlucky he was in the Duke Of Edinburgh handicap at Royal Ascot, off 3lbs higher. He was beaten by 4-lengths into 4th that day but would have been a lot closer to the progressive winner had he not managed to find bad luck mid-run. A similar running, minus the bad luck, would see him have a very big chance here and with Martin Dwyer on board for the first time since his last win, he looks to be worth taking a chance on at 12/1.

Fathsta didn't get his optimum conditions too often last year and still managed to run some fine races in defeat, despite tackling some really good 6 & 7f handicaps. David Simcock's 7-year-old resumes the new season off a mark of 90, which is certainly workable if he's readied to run his race. That's the main issue, because the likelihood is that he's going to be very fresh and that's not a good thing with an already keen-going sort. His chance could well be ruined by the time they've covered a furlong, but he is a very sizeable price at the end of the day and sometimes it's worth overlooking the negative aspects in the hope that you are wrong! With a strong gallop being pretty much ensured, it will help his chances of settling into a nice rhythm and stall 14 mightn't be a bad place to be positioned either (I expect the winner to come from the lower half of the draw; could be wrong mind). Fathsta has gained most of his wins on the flatter courses around but has no issue with the likes of Newmarket at all and the key to him is soft ground. Today, he'll have his conditions and if anything, the uphill finish will be in his favour because he's often seen finishing his races out very well. Martin Dwyer (whom I rarely back) is again the man in the driving seat and he has past experience of riding this animal, although his booking seems to be a clear indication that this is Dr. Marwan Koukash's second-string. It's impossible to read this owners horses though and it wouldn't be the first time that his lesser fancied runner ended up being the best one on the day. Anything from 33/1 to 25/1 is worth having a minimal win stake on and if he's primed to go well FTO, he should do exactly that.

Result 13th @ 33/1; Never involved but should improve for the outing.