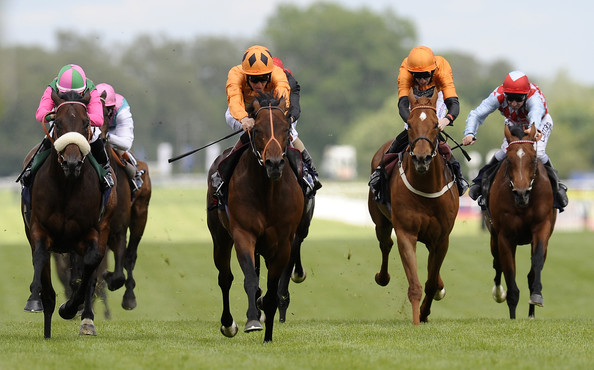 Super Saturday just wasn't to be. Lexi's Hero was the one to kick off proceedings and was well-supported in the market, going off as an 8/1 shot. I had expected that it would be a point and shoot job, but Graham Lee must have been under instructions to make him track the pace and that proved to be a stupid move. He never could run his race, folding tamely once the pressure was applied and it's clear that he's much happier when blasting off. The eventual winner did exactly that and was not for catching, so it's annoying that Ryan's charge wasn't sent out to do what he does best. In all likelihood, it wouldn't have mattered as the low drawn horses struggled to make any sort of impact but it would have been nice if we had some sort of chance, as the market had been very favourable beforehand. I doubt that I'll be backing him again.

Bertiewhittle was next up but he was only towed along at a moderate gallop and that ruined his chances. He's the type who needs everything to fall his way and the lack of race-pace and meeting some (albeit it was moderate) interference in-running made things a massive uphill battle. He ran on strongly once he got to hit full stride inside the final furlong but it was far too late and granted a stronger pace, would have been bang there in this sort of form. He's one for the Ayr meeting I would imagine and will be monitored.

The most confident bet of the day was Lyric Street but that confidence was proved to be unfounded as he failed to run up to his best. He got caught in a pocket as the sprint for home developed in the straight but wasn't going anywhere too quickly and looked to be feeling the ground, which was described as being firm. The right horse won the race (I don't know how!) but Ed Dunlop's charge is a lot better than he could show here and although it still rates as a decent performance, he will eventually leave it well behind. It wasn't to be today but there is a nice pot in him sometime and he's still lightly-raced, with more to come.

Stencive was the one that got away and although there were some other hard luck stories, he really could have won. He met plenty of trouble up the short home straight, at which point he was travelling better than anything, and once getting the gaps he absolutely flew home to get within a neck of the winner. That horse got a massively important first run on him and although was a deserved winner in ways, I do not think that he would have got near our fellow had he got an uninterrupted run through the race. In my opinion, I can't leave much blame at the door of Eddie Ahern, who did absolutely everything right in order to get the best out of this fellow and it was just bad luck that saw them defeated. This was yet another one that got away.

Getting the 3's about Aazif looked pretty sweet after the Prescott animal ran out mid-race and he was still swinging on the bridle under Richard Hughes halfway down the home straight. Sadly, he found absolutely zilch for pressure and maybe he just could not let himself down properly on the ground, as he's going to make up into a strong stayer and I can't believe that it was his staying prowess that gave way. Holding him up wasn't a great idea, given that there was a slow pace on throughout and that would have contributed to his downfall as well. It'll be interesting to see where the horse goes from here. It wasn't his true running.

Poor racing today, with just the one race of interest and that contains the only selection. I cannot be overly confident as he is one who will need plenty go right but that might well happen and taking the risk at the prices is deemed to be worthwhile. Hopefully it is and we can then get motoring for the rest of the month.

Have a good day folks, take it easy and keep the faith. It won't be too long until proper normality will return.

The lightly-raced Democretes looks to have more scope for improvement if campaigned solely as a 7f performer and the Richard Hannon trained 3-year-old is overpriced to win this quite competitive handicap. He comes here on the back of a seventh place finish at Newmarket in what was a much better race and his first away from horses of his own age. Despite the finishing position, he was only beaten by a bit more than a couple of lengths and didn't look overly happy on the track, for what reason I don't know. Setting off in a prominent position wasn't the best idea in my opinion, as Kieran O'Neill had to use up plenty of juice in the early stages to get him over from stall 14, the widest berth of the lot, and it wasn't surprising to see him struggling to repel all comers as they charged uphill to the line. Overall, it could rate as a career-best and he has since had a month off the track, so should be long over those exertions (also was his first run for 51 days). Previous to that he didn't run too well at Royal Ascot but had run crackers on his only two outings beforehand, both at Newmarket (Rowley) over 6f. They came when held up towards the rear and I'm hoping that Richard Hughes, who's back on board, is going to play the patient cards once again as despite making all on both of his juvenile successes, he strikes me as the type who will excel over 7f if waited with in a race that has plenty of pace. There's a chance that this won't be run to suit such tactics, but a few of those closely drawn to him have made the running in times gone by and will hopefully do so again. Hughes clearly gets on well with the horse and is 4-20 (20%) at Leicester on board three-year-old's over the past five years, along with having an overall 25% strike-rate. Democretes won't find it easy to help him increase that strike-rate but if a few things pan out in his favour, and he's ridden with more restraint than last time, then I can see him finishing off the race well enough to trouble the judge. At odds of 8/1, he's overpriced and worthy of having a bet on. The favourite is bound to go close if repeating his last time out run but he seems to want plenty to fall into his lap and must be opposed at the price of 3/1.