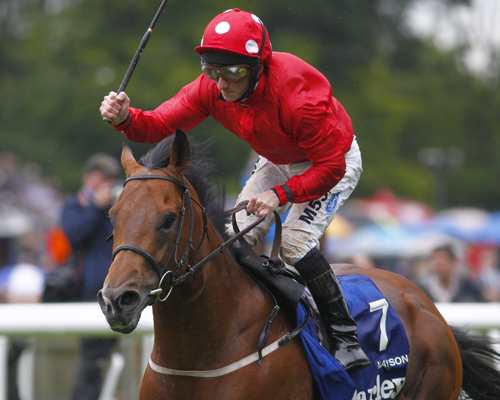 Solar Spirit was supported under the assumption that he would be ridden prominently, but he dwelt when the stalls opened, missed the break and had to be held up as a result. That left him with no chance, as he must be up there to be seen at his best on this sort of track and the race was run to suit the handily placed sorts anyway. Had he been up there, he would have run a better race but he just couldn't make up any sort of ground from his position out the back, staying on at one pace up the straight. It obviously wasn't a great result but I wouldn't hold it against the horse, as he's a different beast when correctly ridden. It will be very interesting to see where he goes next and he'll be considered if running at a sharp track that favours him.

One selection for today, who, if replicating his C&D run a few weeks ago, should be up to running well at the very least. The market will be interesting and any support would be massively encouraging, given the yard that he represents. Hopefully he'll go well and give us a decent winner before the Ayr meeting begins.

Previous Sandown form is usually handy to have and Kaafel ran very well when finishing third over C&D a few weeks ago. The handicapper has put him up a few lbs for being beaten by a couple of heads, but he remains an unexposed performer over this 1m 2f trip and is capable of even better in time, hopefully now. Charles Hills' 3-year-old colt travelled nicely on his visit to this track and looked quite sure to overhaul the pacemaker in the home straight, but could never quite get past him (they meet on same terms here) and eventually had to settle for third. It was a career-best performance from this admirably consistent runner at the same time and to my eye, looks more likely to find improvement over this trip than Croquembouche is, though that one is brought into the equation due to the possibility that he will get his own way up top. The fact that Hills' charge still looks that bit awkward when he comes under pressure would suggest that he's holding a bit to himself and despite having eight career outings under his belt, could still have more left in reserve once the penny drops. Either that or he's just awkward, which is a possibility. I do, however, think that he can progress beyond his current rating of 83 without much hassle when circumstance allows and it may well do so here. The ground will be fine (prefers is decent at least), the track clearly suits based on his last time out run and he has a better draw this time around, in lucky number seven (statistically one of the better stalls here). Charles Hills looks to have his string in good order too following a disappointing August and Kaafel seems to be right at the top of his game as well. A lot will have to go his way of course, but I think that the three horses circa 5/1 in the market are all too short and the value looks to lie within the others. Hopefully we're on the right one, though I'd worry quite a lot if he wasn't ridden prominently again.