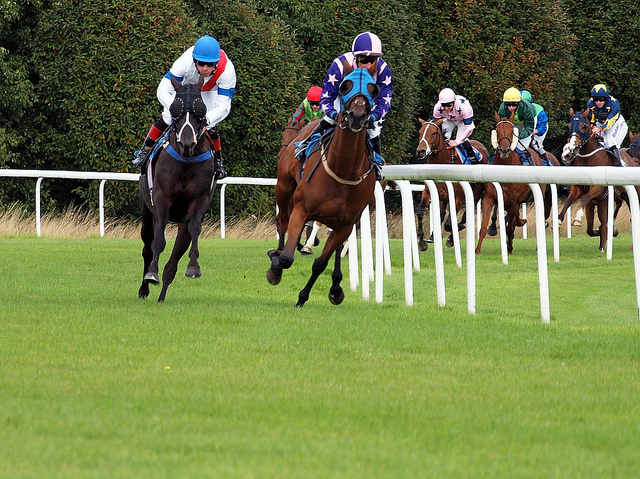 Disappointing run from Kaafel, who got a race run to suit and came into contention to have a chance with a couple to go, only to drop away tamely afterwards. Hanagan gave up pretty quickly and there must have been something up with the horse, as this was a horrible effort and the last thing you'd expect him to do is fail on the run to the line. It's just bizarre and I can't see any excuses for him. He might have been amiss? Now obviously he was heavily eased once beaten, making the bare performance look much worse but I still can't see why he'd finish off so tamely. Maybe he doesn't stay the 1m 2f fully, but the last time out run suggested differently and overall this was just very disappointing, from a horse that I was quite hopeful of.

Two selections for today, including one of last weeks who's worth persisting with. Hopefully one could go and oblige - it would certainly be welcomed! Have a good day folks. Roll on the mad sprints on Saturday.

Edit: Now just one selection, with Ayr being abandoned.

Going to be unoriginal (& back a fav) and persistent, for a change. Wrote this last time out, a week ago;

Anyone looking at the form of Misplaced Fortune would be entirely correct in saying that she's an exposed performer but when connections apply a visor, she turns into a completely different animal. From a total of 51 career outings, this Nigel Tinkler trained 7-year-old mare has won on 7 occasions and placed a further 16 times. However, she has worn the visor on and off on 14 occasions in handicap company and that has resulted in 5 of her career wins, the overall form figures reading; 1-1-2-4-2-1-5-1-2-3-0-4-1-4. That is an obviously impressive string of form and the "0" came when she was only 3-lengths behind Hoof It over 5f at this track back in 2010, when rated just 1lb lower than today and 5f is not her trip, especially in such hot company. Today, interestingly, is the first time that she will have the visor on board this season and that was the case in 2011 as well, as it didn't come back until September. She was subject to strong market support when it did return and would have won the race but for challenging in the wrong part of the track. She made no mistake next time out, with the visor retained, when landing a decent Pontefract handicap off 81 and further enhancing her record with the headgear. She's quite a way higher in the weights this time around than last, but has been holding her form excellently and even managed to defy a mark of 84 back in May when winning a Ripon handicap that has worked out well (second improved about 20lbs since). It was her first success without a visor as well and showed that despite her age and exposed profile, she was capable of running to a very decent level. Consecutive places off marks of 89 & 90 followed, before she failed to land a blow on each of her last two outings. However, she got no run in each of those and is easily forgiven for not producing her best. This race represents a drop in grade and although she doesn't have much in hand off her current rating (effectively 87 after Dale Swift's claim is taken into account) the opposition are mainly exposed or out-of-form sorts who don't exactly have much to work with either. The market leader and the few three-year-old's are ones who you could make cases for with regard to finding more off their current marks but none are overly appealing at the prices. Misplaced Fortune is coming here in better form than her last two outings would suggest and should prove capable of outrunning her odds if stall 7 isn't an inconvenience (high drawn runners usually favoured here). There is a chance that this could be a tune-up for the Ayr Silver Cup, in which she finished third of 25 back in 2010 (winner on her side) but the visor generally indicates that she's out to give her best and hopefully that's the case again.

On that occasion, over 6f at Doncaster, Misplaced Fortune finished second, beaten by just under a length and posted what was probably a career-best effort. She only found an unexposed three-year-old too good that day and it's interesting to see her connections turning her out a week later, to contest a race that she won last year. That win came off a much lower mark but, like this time too, was her second autumn outing in that beloved visor and hopefully history will repeat itself. She's certainly a better mare this season, so the fact that she's so much higher in the weights than when winning this in 2011 wouldn't put me off at all. This race will almost certainly be run to suit her as well and I can only imagine that they're running her in order to get a 6lb penalty for the Ayr Gold Cup in a couple of days. That's wishful thinking at the same time, given that she'd still need to number of horses to come out of the race even with a penalised rating of 96 but she looks to be in the best form of her career and hopefully that's why they're backing her up so quick.

Edit: She was removed from all the Ayr Cup races in the morning, so that's not why she's running quickly.

Today's contest is also against her own sex and a fair way easier than some of her other assignments this season, so she holds an obvious chance of getting back into the winners' enclosure anyway. Some of her rivals are way too short in the betting and although she's plenty short enough herself, a 2pt stake shall be played in the hope that she outclasses the opposition, as I'd expect. Obviously nothing goes too smoothly in this game at the best of times but she will get a nice toe into the race and should be able to travel powerfully, before hopefully doing like she did last year and settling matters with a nice turn of foot.