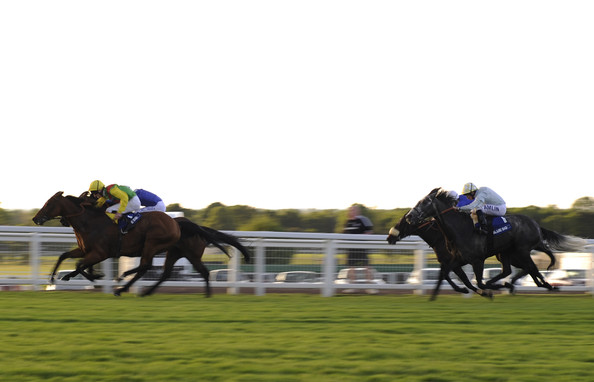 Amazing Amoray was encouragingly strong in the market on what was his first outing for three months, eventually being sent off as the 11/2 second-favourite. Forcing tactics were applied again and he took it up at around half-way, then skipped on by a length or two, at which point he traded around 1/2. Sadly, he was a sitting duck with a furlong to run, edging both ways under pressure and finding his early exertions all too much. He was mowed down by a few of them then, but kept on to finish well clear of the rest in fourth and posted a really good effort, with the run likely to bring him on as well. Anyone who backed him each-way can feel a bit annoyed, as the three non-runners left just three places paid. He's one to keep in mind for the rest of the season but seems ideally suited to fast ground and whether he will get that too often has to be a worry. This was a really good run anyway and he will eventually dot up off his current mark of 77.

There was a bit of money about for Apollo D'Negro as well and he held every chance with a couple of run, having been positioned beautifully by John Fahy. However, he couldn't quicken up when required and may have preferred an even stronger gallop, given the sheer speed test that Goodwood can provide. He was only a few lengths off the winner in the end, despite getting squeezed out at a vital stage (was beat mind) and ran better than his finishing position (eight) would suggest. Again, there should be a handicap for him before the season is out and he doesn't mind a bit of cut, so can be followed despite the likely weather.

Only two decent punting races today in my opinion and we've got a selection in each of those. I cannot be overly confident for an array of reasons (the first needs to overcome a lay-off; second needs to beat some progressive types) but they're overpriced at the odds and at the end of the day, that's all that matters. With a bit of luck, they should be on the scene and hopefully one could win. Have a good day folks, take it easy.

There's plenty of risk involved in siding with Poetic Dancer, as it's impossible to know her true well-being without talking to Clive Cox but he reported her to be working well in his Weekender Stable Tour about four weeks ago and that'll do for me, with regard to whether she'll be in dire need of the run or not. The 3-year-old filly hasn't been seen since having her sole 2012 outing way back in May, due to having an issue with injury but that is reported to be behind her now and as long as she's fit enough to do herself justice, then a good run should be on the cards. She disappointed in that May outing, but it was her first run over a mile and Cox said that the ease in the ground was what beat her, so we can put it down to that. Today, she will have her ground conditions and will hopefully resume the progress over her juvenile campaign. It saw her win a decent 6f Newbury maiden at the second time of asking and ended with another victory at Newbury, this time over 7f in what was a competitive nursery. That win came off a mark of 84 and given that she was expected to make up into a better three-year-old, there should be room for movement off 89 here. It's all a case of whether she's fit enough to do herself justice, because if she's not near peak-fitness then it would be an impossible task to see her win this, in all likelihood. If she is race-fit, then I'm 100% certain that she has the ability to win a race of this nature and taking odds of 14/1 about her being readied is good enough for me. Adam Kirby is on board; he and Clive Cox teamed up for 9 August winners and it's a real positive to see him getting the leg up (was on for that Newbury nursery win). The yard form is another positive, with Cox's animals running a lot better now, having struggled in the early part of the season (the same as last year). He also gets plenty of three-year-old winners at Salisbury and won this race in '07 (had close third last year; a 12/1 shot). The track promises to suit her and the race will almost certainly be run to suit, so again we'll just need to hope that she's fit enough to do herself justice. If she is, she should be capable of playing a hand at least and shouldn't be a 14/1 shot. She'll win before the season is out, if getting quick ground and hopefully that comes here. Of the rest, Elusive Flame should be right on the premises as well.

A few completely unexposed and evidently improving three-year-old's dominate the market here but all of them look too short to be worthy of support. Watered Silk looks like the best alternative to me and should be capable of going very close, granted a bit of luck. Marcus Tregoning's 4-year-old comes here on the back of a cracking effort over 1m 2f at Leicester, an effort that would rate as a career-best and signalled a return to form as he hadn't run to his best on his previous two outings before that (had excuses). On that occasion, he finished second, just a quarter of a length off an improving and well-backed three-year-old who had the run of the race up top. Our fellow was clearly suited to the run of the race as well but I thought that it was interesting to see him get badly outpaced when the tempo lifted, only to run on strongly for the last furlong and end up being being narrowly denied. He hasn't looked like the strongest of stayers in the past, but that run suggested that a step up in trip would do no harm at all and he's getting that here. It's also interesting to see Tregoning reach for the blinkers again, for the first time this season. They had a dramatic effect last year, seeing him win back-to-back handicaps in August on the first two times that they were on board and hopefully it'll be the same story again. He certainly looks to be an improved performer this time around, even without a set of blinkers, and off a mark of just 4lbs higher than when successful at Chester in May, he must come into the equation. Richard Mullen gets on well with the horse too and is a positive booking for the yard, a yard who are in fine form and usually have their runners peak at this time of year. The market leaders may be tough to beat if their promise of better things comes to fruition, but at the prices I'd rather side with previous on-track proof and it's the useful Watered Silk who catches the eye the most. He also has previous course form that looks atrocious but he didn't stay over the 1m 6f here, having travelled best into contention, just over 12-months ago. This is his sort of track and he should go very well.