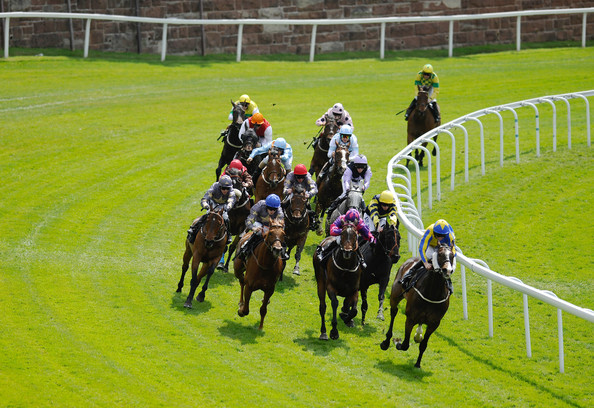 Newnton Lodge was easy to back in the market and that might have suggested that he was expected to improve for the outing. Again, he was keen throughout the race, not getting the desired pace to run after and that didn't help at all. He still managed to travel nicely but couldn't quicken when the tempo lifted and was caught flat-footed, not surprising given his lack of race-fitness and his early keen-going ways. It just wasn't run to see him to best effect, even if he was at 100% for the day and I think that he ran really well, better than the finishing position would suggest anyway. If connections want him to win, he'll need a real test over a mile but he shaped like he'd get further (possibly deceptive) and could be worth a try over 10f, though would need to settle a lot better. This is a horse to monitor in coming weeks and has the potential to bolt up off his current mark, so keep him in mind. He was also ridden with kid gloves here and it might have been a fact finding mission, to try get him to settle and to get a run. He's better than the bare form.

Three selections for today, all decent prices and it'd be lovely if one could oblige to kick-start the month on a good note. They're all very tricky races though, so we'll need some luck but one couldn't say that we are not due a little bit. Particularly keen on the one we have for the Beverley Bullet. That price is simply wrong but it is a big-field 5f sprint at the end of the day and if one thing goes wrong, it all goes wrong. The same could be said for the others mind, but they're not such stand-out value. Anyway, here's hoping and best of luck with whatever you're picking out yourselves. Take it easy folks and roll on a stream of winners, soon?

Could have been so much sweeter if some of the seconds crossed in front. Full update online in a while.

Kyllachy Star has fallen to his lowest mark since his first turf outing of 2010 and having run consistently well all season, could be about to strike. Richard Fahey's 6-year-old is a really tough horse to win with nowadays, with his last success coming over C&D in May of last year. That was off a mark of 94 and on the evidence of this years form, I still see him as being capable of running to a similar level when things pan out for him (needs a proper race-pace & plenty luck in-running), so has to be considered as a lively contender for the "Good Doctor" off his current mark of 86. His run last time out doesn't make for fantastic reading but he succumbed to a poor ride from Neil Callan and although he certainly wouldn't have won given how easily the winner went about business, he would have posted a far better end result if given the chance. That was also at Ripon and I don't believe that to be his sort of track. Chester is, with him being a two-time winner here (has a pair of seconds as well) and a veteran of 11 outings, so at least there are no doubts as to whether he can go here, unlike some of the other more fancied runners. Franny Norton also gets the leg up for the first time and he's the master of Chester, with no fewer than 58 career wins coming here and he has an excellent record on board the Koukash horses (5-21 for Fahey). Stall 9 isn't ideal but he's likely to be held up anyway and those with seemingly bad (or worse!) draws have won 8 of the last 10 running's of this race, strangely enough. There's no doubting that Kyllachy Star has a lot on his plate in order to win this, but he's attractively handicapped, suited to all the conditions and has an excellent rider on board. Added to that is plenty of deceptive form on his book for this season, which leaves him being quite overpriced and he's worth taking a chance on. He'll be trying too, given Koukash's love of the track.

There's no doubting that Start Right is a very tricky animal who requires expert riding and a lot of luck in order to end up victorious, but we do at least know that he has the class to win a handicap of this nature off his current rating and he looks like value against the field. The Godolphin owned 5-year-old has not been over-raced this season by any means, having joined up from Luca Cumani's stable. He has still to taste victory for the the boys in blue but has been shaping really well of late and career-success number four may not be too far away. It is his penultimate outing that caught the eye the most, over this 1m 2f trip at Glorious Goodwood. He was a running-on third of 18 that day and was unlucky not to have come home in second, having failed to get a run for much of the home straight. Landaman was the winner of the race and whilst our fellow was never going to beat him, that's understandable and Johnston's charge went on to bolt up under a 6lb penalty a few days later at the same meeting, boosting the bare form even further. I can't say that the bare form of SR's next outing was as good, because he was beaten a nice few lengths at York just ten days ago but had a horrible draw that day and wasn't suited by the lack of true race-pace. He ran on when it was all too late, but usually does that anyway. Returning to Sandown will do no harm, as he ran his best race for Cumani at this track, over a mile, when second in a valuable handicap in July of last season (final start of year and for yard). Again, he was a bit unfortunate due the winner being suited by racing handily but at least it proves that he can run his race around here and it came off just 1lb lower than today's mark. Silvestre De Sousa is back on board (as at Goodwood) and that's a positive, as I don't think that Dettori was overly good on him last time out. He's also riding really well of late (6 of last 14 have won). Start Right also seems to like being turned out quick (all wins from break of two weeks or less) and has no excuses with regard to ground and track/trip. A good pace would be a huge help and he will need luck in-running from his inside draw, but 14/1 underestimates his chance and he's one to keep on side. One thing that could beat him is that the track can favour those who are up there and if it's like that today, then it will hinder him massively. Let's just hope that they go off far too quickly and even if there is a bias, it won't matter. He should be flying home anyway. Any market support would be really encouraging as well.

Move In Time is one of the more interesting contenders lining up for this Listed event, having been lightly-campaigned this season for one reason or another. Whether or not that was by design is beyond me but Bryan Smart will surely have this 4-year-old primed for a serious Autumn campaign and let's hope that it'll start with victory here. He was a very busy fellow through his first two seasons, lining up to race on no less than seventeen occasions and he rarely performed badly, proving himself as an ultra-consistent sprinter. Last year, his season finished off with success at Ascot over the minimum trip, in a 16-runner Listed event for horses of all ages. It was a good race and he did it in fine style for the most part, though didn't have too much in hand at the finish. However, it's usually quite tough for the three-year-old sprinters and with time on his side, he would have been expected to be capable of better with another winter under his belt. Smart got him back out in May of this year for the Group 3 Palace House Stakes and he ran really well, travelling sweetly throughout (better than nearly all) before his effort understandably flattened out up the hill. He was expected to come on for the outing but tackled a Group 2 event in France next time out, where he was not well-drawn and simply had no chance of getting competitive. He was then put away for another couple of months (due to ground I'd imagine; wants good or better) and returned in a fast-ground conditions' race at Nottingham just over two weeks ago. He was well-supported on that occasion, but it came in a small-field in which he got no cover out wide and couldn't get motoring until it was all too late. It seems as if he's far better suited to prominent tactics and with all things considered, it rates as a fine comeback run. That will certainly have been to put him right for this event, which the yard has taken twice in the last five years and after a poor July for them, their results picked up significantly in August, so that's a certain positive. Stable jockey Tom Eaves, who's in good form of late, seems to have chosen him over the other Smart runner in the race and that's encouraging. I think that he should be about half the price that he is and thus warrants a 2pt bet. The draw will help, the ground should be fine and he has won impressively over C&D in times gone by as well. All points towards a big run (he also seems to love big fields) and although this certainly won't be an easy race for him to win, he's quite overpriced and may well be up to winning. Pabusar is an interesting one as well but stall 10 could be quite prohibitive and his price just is not generous enough.