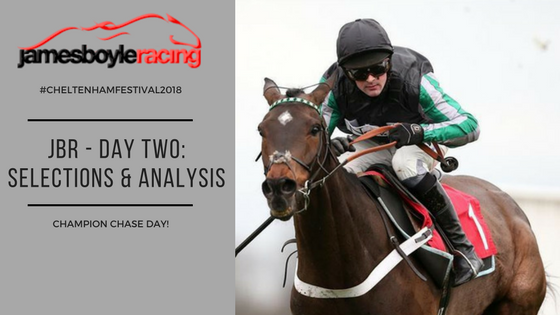 Day one was tough and cruel! Footpad won to provide an even money winner (it took great skill to pick that out!!!), but we had a couple that got away. Shantou Flyer at 18/1 being the main source of frustration and had he jumped the final fence running, he would have emerged victorious instead of finishing a neck behind in second. Each-way money back but that was annoying (plus I was on win-only!). Ms Parfois at 7/1 also lost out narrowly and for most of the run to the line I thought she was going to win. It wasn't to be.

Debuchet ran well for a long time in the Supreme (probably wants better ground and a longer trip now); Apple's Jade was a huge disappointment in the Mares' Hurdle and I can't explain that run; Wicklow Brave got away on terms in the Champion but didn't come up the hill again; and Testify was cooked in the finale after making an error four out. It could have been a good day but such is racing - you can find a cracking bet or two at these festivals and still come out with zero worthwhile winners. On we go towards the second day...

Samcro "is not the second coming of Jesus Christ" according to Michael O'Leary and whilst he's probably right on that score, the Gigginstown inmate is a super talent who really could be anything. He's an unbeaten 6-6 in his career to date, half of those coming over hurdles and that latest performance at Leopardstown was really impressive when you take into account the drop back to two-miles against talented rivals did not appear totally ideal pre-race. He made light work of them to win by over five-lengths! Going up in trip again will suit and the likelihood is that he's going to make it 7-7 today, but quotes of 8/11 leave little room for error.

In the betting without the favourite market, Vision Des Flos at 8/1 appeals each-way (three places) and is the one I like as an alternative. He showed a complete new level of form at Exeter last time, clearly improving for a small wind-op after disappointing at Hereford, and remains open to even more progression at this distance. It might be a stretch to beat Samcro but he can put it up to the best of the remainder and gets the nod. Again, it's the sort of bet I wouldn't bother with if I wasn't covering every race at the festival but I am, so he'll do! Black Op is another likable sort who'll go well, he's just not as appealing when it comes to price.

This looks wide-open with claims easily made for any number of the runners. Presenting Percy, the "badly handicapped" horse who bolted up in last season's Pertemps, returns in search of another festival win and I quite like him. He ran a stormer behind Gold Cup hopeful Our Duke at Gowran last month (that is the best form on offer here) but he had a hard race and, with little more than a three week turnaround, the hope for his connections is that it won't have left a mark. It really is impossible to predict at this stage but he's a short enough price (5/2) to feel that looking elsewhere is justified and better ground would have been preferred.

Monalee is the main market rival and won a Grade 1 when last seen at Leopardstown. That was an admirable performance in which he looked to be crying out for this trip and I think he might be the one to beat. He, too, has strong festival form having finished runner-up to Penhill in the Albert Bartlett twelve months ago and should have no issue with the softer underfoot conditions. Riding him from the front is not a necessity either and the general run of the race, with a proper gallop looking assured, should suit. The price is far from mind-blowing and won't make anyone rich, but I would have him favourite and expect a big run.

I could back five in this and get it hilariously wrong, but one book offers seven places and a few go with six, so each-way players will be happy out! Fixe Le Kap is the main fancy but Nicky Henderson's 6-year-old will have to bounce back after a poor run at Ascot last month. That was, however, his first outing after a wind-op in December and may well have been needed in more ways than one (regaining confidence in his breathing being one, fitness the other). On last year's form, he looks reasonably treated off 141 and didn't fare badly in the Fred Winter. At 16/1, given the place terms on offer, it's worth taking a chance on him.

We have the makings of a cracker here, though not from a punting point of view! Altior vs Douvan, with Min thrown into the mix for good measure. I don't think the latter mentioned is good enough if the top two run to their ability and with Douvan having been off since lining up in this race last year, preference is for Altior. His preparations haven't been smooth either but there has been a market overreaction to the issue he had a couple of days ago with his foot and odds-against are quite appealing actually. His comeback run was sound, he'll handle the conditions and devour the hill. I think he'll win with Douvan an honourable second.

Finding an edge in the Cross Country races is not something I have managed to do at any point in all of my years punting and I'll keep this short and sweet. The Last Samuri is a token selection as he will handle the ground without any problems, jumps well, stays well and is reported to have loved these fences when schooled over them. He's using this as a stepping stone to the Grand National but mightn't even have to run up to his best to win if the unique course isn't a problem. Cause Of Causes would be a fairytale victor as he bids for his fourth straight festival win but there's no juice in the price so I'm happy to find an alternative.

Leaving this race well alone would be ideal! Knight Destroyer is held by favourite Nube Negra on a couple of pieces of form but should he run well here, it wouldn't be the first time a Jonjo O'Neill horse has improved for going handicapping, or indeed for running at the Cheltenham Festival! This former flat performer looked useful when winning at Uttoxeter in October and the promise of doing better when faced with a big field and a strong gallop is in place. It will have to take him to a new level, no doubting that, but stranger things have happened and he could run into one of the five places on offer with plenty of the books.

Another race I can't claim to have an edge in but I'll suggest Rhinestone to run a big one. He shaped well when runner-up to the favourite for this, Blackbow, at Leopardstown most recently and that looked like a cracking bumper at the time (still does!). The winner may have got a better ride on the day and I wouldn't be shocked to see the form turned around. Having such a high cruising speed will be in favour around here and if they go hard up top, as you'd expect in such a big field, Joseph O'Brien's charge should be finishing off well up the hill. Hopefully it will be fast enough to come home in front of the other twenty-three runners!