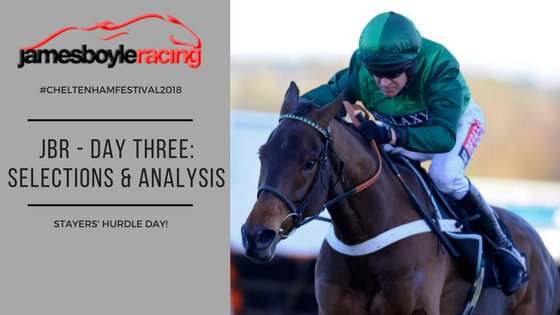 I'm starting to remember why I gave up National Hunt punting! The first half of the festival has been tough and day two provided nothing of note. Altior was the only winner and his performance was spectacular, the hill again being his friend as he powered home by seven-lengths. Ground conditions didn't suit but great horses win when things aren't in their favour and he is top, top, top class. The only pity was that Douvan didn't stay upright but it's long odds-on that his mishap made no difference to who would have won.

The Last Samurai returned place money at 6's so at least paid for himself and did run a good race; Monalee was second, just failing to stay against an evidently high-class horse - connections may regret not going for the JLT; Vision Des Flos tanked around for some time and tried to win the race off the home turn, but burned out; Fixe Le Kap was my main hope of a nice-priced winner but failed to fire; Knight Destroyer fell when in the lead in the Fred Winter; and finally, Rhinestone wasn't good enough to make any sort of impression.

Onto day three we go and there's some cracking racing. Write-ups are brief - I'm running out of time sadly!

Nicky Henderson hasn't had Terrefort for too long but in two British runs, the grey French import has made an impression. He bolted up at Huntingdon on debut for the yard in January, ruining any handicap aspirations in the process, then got the better of a smart performer in Cyrname to win the Grade 1 Scilly Isles at Sandown. A slight step up on that could well suffice in what isn't the best JLT I've ever seen and quotes around 4/1 are fine. The only negative is that he's a 5-year-old, although one with lots of experience.

Delta Work is the first of two bets in this race. He, too, is a bit on the young side but does remain unexposed and could be well-handicapped off 139. Recent efforts have been very solid, particularly since upped in trip to three-miles, and Davy Russell should get a good tune out of him. Who Dares Wins ran a cracker in the Coral Cup last year, finishing third, and I'm interested to see him at this trip for the first time. He stays all day on the flat and it may be what's needed to get him to hit the frame at a festival again.

No prizes being handed out for originality here. Un De Sceaux returns to defend his crown after putting in a spectacular round of jumping twelve months ago. It's not a great betting race and one I'd rather leave alone, but he will have been primed for the day whereas Cue Card had a tough outing at Ascot less than four weeks ago. That added freshness will do Willie Mullins' charge no harm in the latter stages and as long as he doesn't fight his rider too much, I think he'll emerge victorious to land the race once more.

Full race preview for the race is on the site. You can view it HERE (CLICK). Fingers crossed L'Ami goes well!

King's Socks represents David Pipe, who won three of the last eight renewals of this race, and shaped well enough on debut for the yard at Kempton last month. That was his first outing for nearly a couple of years and it's safe to say that improvement is expected now running in a handicap. Traffic Fluide is the flyer at a price. His recent form is mediocre but he has run in Grade 1's the last thrice and the assessor looks to be taking a chance by dropping him to 145. With five places on offer, he's an interesting play.

This race is of zero interest to me and I don't care who wins! Laurina is the token selection as a result of her hammering of Alletrix, an easy next time out winner at Leopardstown. Classier rivals will be taking on the Mullins mare on this occasion but she could be a level above them with more to come. The ground won't be an issue and she'll be many people's banker of the day. I'd rather leave the race alone but will cheer her on. For the places behind, High School Days might be a bit on the underrated side at 33/1.

Final Nudge has performed well since embarking on his chasing career last season and could get involved in this ultra competitive handicap. He already has done exactly that in both the Badger Ales Trophy at Wincanton (second by a head) and the Welsh Grand National (third), and Sandown can be a funny track so I wouldn't be disappointed with his latest fifth there. He has all the attributes needed to run another big race and 14/1, with some books again offering five places, will do the job.