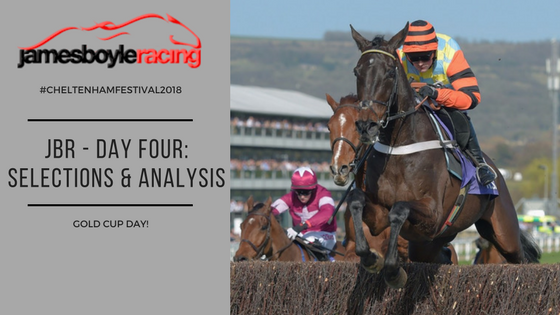 The third day of the festival was more like it! Delta Work provided a nice 10/1 winner in the Pertemps, holding on by a nose after moving powerfully throughout. It was a cracking ride from Davy Russell and there is no better National Hunt jockey around than him, as has been evidenced this week (bar his ride in the Arkle!). In the same race, Who Dares Wins also placed at 14/1 to ensure it was an even more enjoyable contest - and Alan King's horse did remarkably well considering what a keen hold he took early on.

Laurina also won and did so in unreal style, although she was a token selection; King Socks paid for himself, placing at 7/1, and will be of interest when granted a sharper test having tanked throughout; Terrefort finished second, just bumping into a high-class mare and he's a nice one for the future; Un De Sceaux also bumped into one and was too free to get home; Final Nudge moved well but wasn't up to it; whilst, finally, L'Ami Serge did not appreciate the run of the race in the Stayer's Hurdle. No pace on, no fun! Pity.

After three days, the selections (at level stakes) are -0.22pts so effectively dead-level and I'm not too dissatisfied with that. If Shantou Flyer had a bigger neck we'd be nicely ahead! With a bit of luck, hopefully the final day is about to throw up a few good ones. There are no shortage of opportunities to get stuck in and I'll be on the hunt for a big-priced winner, then run into the darkness and leave the National Hunt well alone for another 360-odd days! It has been fun, mind, and thanks to everyone who has viewed the site.

The last three favourite's have won this, including two owned by JP McManus, and Apple's Shakira could well repeat the trick and confirm herself as an immense talent. She looks to have everything required to emerge victorious and the December performance, when breezing away from Nube Negra over C&D, looks even better after that one finished third in the Fred Winter having travelled best of the lot. There are better rivals in place now, of course, but are they as talented as her? I really don't think so. She'll eat the hill.

Spiritofthegames is the first of two fancies in this year's County. He was third best behind Kalashnikov in the Betfair Hurdle and previously finished second to William Henry in the Lanzarote, both very strong pieces of form. Connections could have gone down the Coral Cup route but the yard know what's needed to win this and they've a live contender at a big price. William H Bonney is the other play; he doesn't always finish his races out but seems to like this course and has the cruising speed to make you think he can rate higher.

It's completely unoriginal but Santini is a lovely prospect and based on his win over two-and-a-half miles here in January, he's going to relish this longer trip. It's worth nothing that, when winning there, the horse he forced into second spot was Black Op and Tom George's charge subsequently ran to a similar level in coming second to Samcro in the Ballymore. I'm not saying Santini is a better horse than Gordon Elliott's charge but he's going to make one hell of a chaser next season, hopefully after succeeding in this race!

Definitely Red is not one I had ever envisaged backing to win a Gold Cup... but here we are! He has been very impressive the last twice, most notably when giving 4lbs and a battering to American in the Cotswold. A further step up will be needed but it won't have to be major and to my eye, this looks a poor renewal. The other I want to keep on side is Christmas Chase winner Road To Respect. How the race pans out could see him to good effect and beating Balko Des Flos looks even better form after his performance yesterday.

Hunter Chases are not my favourite races but Virak is where the pin has landed. At his peak, he was a very useful performer who reached a mark of 159 and unsurprisingly paid for his consistency by hitting the wall afterwards (reported to have had issues also). He's still only a 9-year-old and arrives on the back of a couple of wins, including on heavy ground at Haydock last month. The conditions will favour him more than most and with a clear round, he could at least get into one of the four places on offer.

Diese Des Bieffes is another selection to have run in the Lanzarote at Kempton a couple of months ago and may well have been caught out by the nature of that track, despite stepping up to the trip for the first time. The way he kept on to the line bodes well and if he is travelling within himself coming into the last few furlongs (and not flat out!), I think he will relish the hill. In what is a race for conditional jockeys, getting the services of James Bowen is a huge positive too and they should go close off a mark of 137 if all goes to plan.

The Game Changer is a non-runner so I'm switching to Some Plan. Ideally, I don't want to be backing a last time out faller in these competitive handicap chases as if there are any mental scars, you're not going to get much opportunity to get your confidence back. He is, however, a fairly treated horse and was going fine when tipping up three out at Leopardstown. With Noel Fehily taking over from a conditional, it may be worth taking a punt in what is a ridiculously wide-open affair. Theinval is the other of interest (ground?).