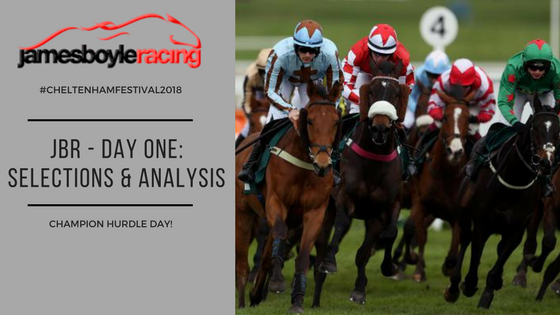 Despite National Hunt racing annoying me more often than not, there are few weeks in the year I look forward to more than this one. The racing on offer is epic, there are some cracking betting opportunities and none of the horses are being lined up for another day! Throughout the week, I will be posting my selections for every race on the site. They are, however, not official service selections so no stakes will be advised and even if they make 100 points profit at levels, they won't be counted towards any figures. Best of luck to everyone who is punting and here goes nothing with the Cheltenham Festival Day One picks...

Getabird is obviously talented, I just don't think he's as good as some of the yard's recent winners and the price is shorter than it should be on account of who his connections are. He's still the one to beat - and I liked the way he got the better of Mengli Khan - but at sub 2/1, no thanks. Kalashnikov has the highest official rating following his Betfair Hurdle win at Newbury and he's a nice sort who should enjoy the hill. Quite whether he wants this ground is questionable, even after that last run, and I would have preferred to see him in the Ballymore on a better surface. He'll be a popular each-way play but doesn't do it for me.

The one I want to take a flyer with is Debuchet. On hurdling form, his claims are limited and I'm probably barking up the wrong tree (as is often the case), but there was definite improvement in his sixth behind Samcro at Leopardstown last month and it's reported that his trainer hasn't got the clearest of runs with him this season. She's happier now and twelve months ago he ran a screamer when second in the Champion Bumper as a 4-year-old (no easy task), finding only Fayonagh too strong in the finish. If he was back to that level of well-being, I would not be one bit surprised to see him outrun the current quotes of 33/1 and place.

This may be a small field but it's a brilliant race regardless and should provide a thorough test throughout. Willie Mullins' Footpad has been pretty flawless over fences to date and they look to have made a man out of him. He's 3-3 in the code and there was a lot to like about his defeat of the reopposing Petit Mouchoir at Leopardstown five weeks ago, always seen jumping well out in-front before quickening away from that rival in the straight. Further improvement could be in the locker (already is a better chaser than he was a hurdler!) and he seems to be many people's odds-against banker for the longest time.

I'm inclined to agree with them. Fair enough, Petit Mouchoir should sharpen up for that race last month having been off since October and he did get the better of Footpad on a few occasions when they faced-off as hurdlers, but the bigger obstacles can be a great leveler and look to have swung things in the favour of Mullins' charge. Saint Calvados could be the fly in the ointment as far as the market leader is concerned and was super impressive at Warwick, but second spot is the best I see him getting if Footpad shows his true worth. If I wasn't covering every race I'd leave this one alone but, unoriginally, the favourite gets the nod!

Now we're talking! A proper betting race for those sad souls like myself who enjoy value for dinner. Eighteen runners, plenty of firms offering five places and some market leaders who take up too much of the book for my liking. Coo Star Sivola bolted up at Exeter last time out but that was an egg-and-spoon race in comparison to this and for all that he remains capable of further progression at the trip, 5/1 is short. Last year's runner-up, Singlefarmpayment, would prefer better ground and flopped last time, whilst Sue Smith's Vintage Clouds can make mistakes at his fences and won't get away with many in a field like this.

At 18/1 (with five places paid), Shantou Flyer looks a play. He has already finished ahead of the favourite this season, doing so around this track, and although that was at a shorter trip, three-miles isn't an issue for me. That last run at Kelso is easily forgiven (small field in which they jogged around for the majority) and I'm interested to see how he reacts to wearing a visor for the first time considering the rejuvenation in his form since cheekpieces went on three runs ago. It could be a coincidence of course but we'll know more later! In a wide-open contest where some are underrated and some definitely overrated, this lad can go well.

I covered this race last week. Still happy with Wicklow Brave and all I'm hoping now is that the horse jumps off. It's great to see the blinkers back and Patrick Mullins gets fine tune out of him, so fingers crossed the least they grab is place cash! You can read my thoughts on the Champion Hurdle HERE (CLICK!).

There's little point on spending too much time on this race. Apple's Jade is a minimum of 4lbs clear of the remainder on official ratings and the closest pursuer in that department, La Bague Au Roi, is probably a bit overrated. Gordon Elliott's mare won a better renewal twelve months ago when seeing off Vroum Vroum Mag and Limini, neither of whom return, and if she runs to ability she'll repeat the trick. Her form this season has been excellent and there was a lot to like about the defeat of Supersundae over three-miles at Leopardstown, a trip that doesn't really play to her strengths. This is more her bag and she should win.

The more talented bunch of amateur riders usually come up trumps in this and it's no surprise to see the top of the market dominated by them. Nothing at a big price really appeals to me anyway, regardless of which jockey is on board, and Ms Parfois is where my dart landed. Will Biddick hasn't won the race before but went close in 2012 and should get another excellent spin on board this progressive mare. She has been in fine order throughout the season, winning three of her five starts and this four-mile test on soft ground should be no problem whatsoever based on her running style and everything that has been shown on-track.

Finishing second to Black Corton at Ascot most recently was no disgrace, with Paul Nicholls' winning machine no bigger than 8/1 for the RSA, and the run of that race wouldn't have suited at all. She will get a proper pace to sit near this time around and there's an added bonus of being in receipt of a half-stone weight allowance for being a mare, which looks generous! I wouldn't usually go each-way on any horse, never mind one at single-figures, but with some firms offering four places and 7/1, it's too tempting. If she runs her race and everything goes to plan (does it ever in these contests!), a place is the least I'd hope for.

If you're confident in anything winning this, good luck! It's viciously competitive and there are a few who have been "saved" for the race, so to speak. Testify is yet to face a proper contest (in terms of field size) over fences, with his three runs to date having four or less runners, but despite that he finds himself lining up off top-weight. Connections may feel that's a tad harsh but in the long term, I will be disappointed should he not prove to be better than a 145 performer and Lake View Lad, who Testify comfortably dispatched on his first chasing start at this trip last time, has boosted his form since (defeating a subsequent winner).

Whether he will be able to hack a cavalry charge such as this remains to be seen but the fundamentals are there as he makes a nice shape over his fences more often than not and handles bad underfoot conditions (any horse with heavy ground Haydock form would handle a bog). Again, it's an each-way play with four, five and six places on offer depending on which bookie you're fortunate enough to not have been closed down by as of yet! Others of interest include Barney Dwan and Report To Base, but I'm just having one bet and that's on the Donald McCain runner. Should he prove as good as I think he is, he'll run big and get involved.