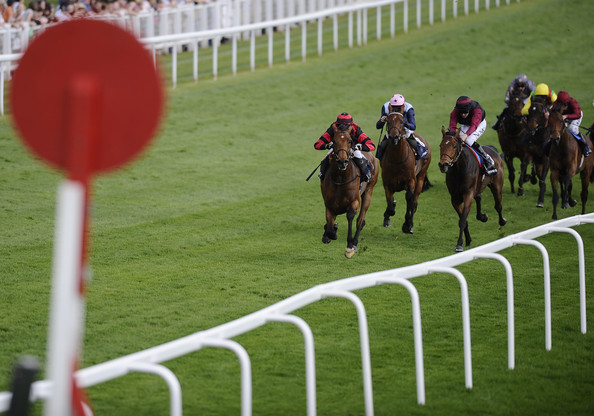 Chindit won to ensure a small loss on the day! It looked worrying for him for a few strides but class won out in the end and hopefully it'll be onwards and upwards. To run down a clearly very talented pacesetter in Mehmento might look a better effort in time and it looks like Chindit will do better over a mile. Whether that'll be in the Guineas or not, I wouldn't be too sure. He might be a tad short of that class.

Of the remaining three to run (Good Birthday was a non-runner), Danyah ran a cracker. He bumped into a well-handicapped rival and had to settle for second. Red Verdon wasn't good enough and the favourite was a level above what I was hoping! Umm Kulthum was keen throughout and failed to get home, blowing my hopes of her improving at 7f into smoke. She'll not be contesting the Guineas anyway!

Two bets at Pontefract for Monday, hopefully they'll give us a good spin for our money.

Justanotherbottle has developed an odd habit of rearing right as the gates open, a stark contrast to his usual quick-to-stride ways but hopefully he'll stop doing that soon! If he does, this looks like the perfect race for career win number eight and he should be coming to his peak following a couple of outings in the past month. Getting onto a stiffer track, and one that does favour his usual running style, can help matters and he will get a nice tow in from Caspian Prince. I think he should be hard to beat here.

City Wanderer is far from an obvious contender on his latest form figures, most of which came with Mick Channon last season, but he has since joined up with Ruth Carr and that yard are threatening to hit some good form. This 5-year-old is well-treated off 70, 5lbs below his Windsor win in 2019 (a mile on fast ground), and he wasn't disgraced on his All-Weather and stable debut at Wolverhampton. Turf suits better and it wouldn't take a huge step forward to get him involved. 33/1 looks too generous to me.