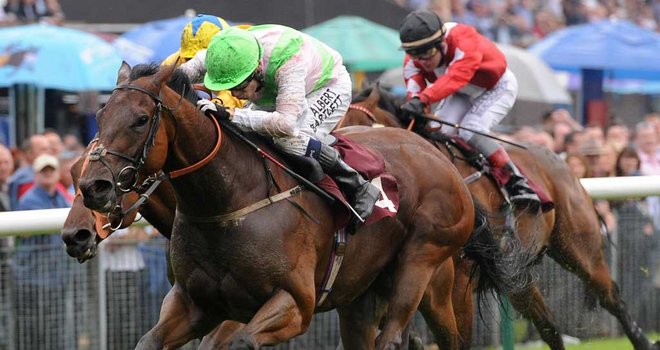 Saturday's either go one way or the other. This one went the other. Fundamental was the best performer of the lot, finishing second in the Bunbury Cup, and beat all bar the winner easily. It was a great effort from an improving sort and he should be capable of stepping up to Listed & Group class after this.

Fame And Acclaim ran a cracker too, finishing third at 16/1. If I'm being picky, he was maybe committed for home earlier than would be ideal but it's hard to know as the winner's a good horse and the runner-up was thrown-in on some of his old form. Hopefully he'll pop up in another handicap before long.

Top Rank gave it his best shot and only just missed out on a place, but the way the race developed with the field splitting into two groups early on made his life more difficult that it needed to be. He wants to get pulled into a race but did the pulling for some time and that wasn't in the script!

Of the others, Count D'Orsay got too far back, Dark Pine missed the break and Method was keener than ideal in what was a proper Group 1 sprint. All of those bets made a lot of sense to me pre-race but don't make as much sense after the event! I still think the last mentioned has potential to get it together.

Method was one of last week's selections but in fairness to the horse, he ran in the Group 1 July Cup and it turned out to be one of the best renewals of that race in many years. Despite that, he still should performed better but he was slow to stride and over-raced on a track that just mightn't play to his strengths. Now, he drops majorly in Grade, runs on top of ground that won't be as quick and gets onto a level track where he has won before. He has to prove his well-being but shaped very well at Haydock in May. 12's are solid.

Diocles Of Rome is more exposed than some of these but was better than ever during the winter and could improve again. He certainly moves through races like one who could do so and despite his turf form having a more unbalanced look to it when compared to his AW efforts, this course suits him ideally. Laura Pearson is back on board removing a valuable 5lbs with her claim and hopefully the pace will be strong enough to pull the pair in for a late challenge. It's a wide-open affair but if he's fit, he'll be going close.

Son And Sannie owe me a sizeable bag of cash at this point but here we go again! He wore cheekpieces for the first time at York last time and that didn't really work out, so it's no surprise to see them discarded. The draw and where he raced mightn't have helped matters either, and whilst this is a 0-95 - well above the level he needs to compete at from a rating of 75 - Haydock is a weird track prone to throwing up some odd results. If he gets onto the lead, it's not impossible that they could struggle to pick him up. Maybe.