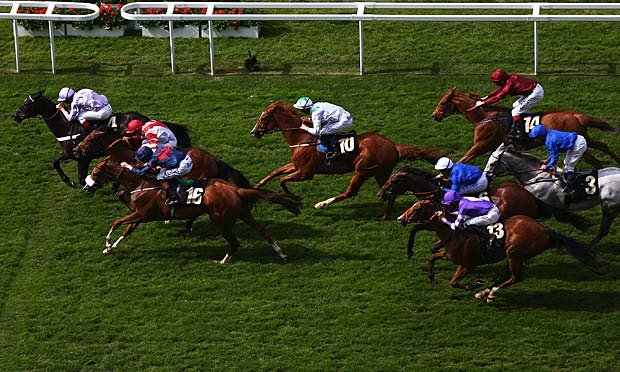 I was certain that Home Before Dusk would get a race run to suit and perform accordingly. Of course, neither happened! He missed the break, didn't get the fast pace he needed and blew up when asked to make inroads towards the leaders. I'd imagine something else was wrong given the complete lack of any finishing effort. Hopefully he'll be back on track soon and proving this to be all wrong.

Firmament did get a race run to suit... if he was positioned properly! Sadly, they took a completely different tactical approach to what I was hoping for, going harder early to get towards the front from a wide draw and whilst he travelled along fine, his race was run coming down to the last couple of furlongs. He'll drop another few pounds in the weight and remains of interest for another run or two.

Last up came Bollin Joan and, thankfully, she was first home... just! Ella McCain got a fantastic tune out of her again and as was hoped, the finishing effort was there this time around. I thought she was going to get chinned as well and that would have been cruel as she travelled all over the others. Once reassessed, life will be harder but she's capable of better still and handles any underfoot conditions.

Any day where there's a winner is a welcomed one! We've now hit 101pts staked in the season and the profit is at +64.31pts (ROI +63.67%). Obviously not sustainable over time but I'm delighted with how things have gone and hopefully can keep the positive figures going over the next few months. Thanks to everyone who has been viewing the site and sending nice messages, makes it all the more worthwhile!

Brian The Snail hasn't matched his All-Weather improvement in three runs since returning to the turf but his mark is collapsing and from a good draw down in a Class 4, he might be able to do better. Quick ground could be what he's wanting these days as well, so the good-to-soft encountered on each start this season probably hasn't helped him. Indeed, the last time he ran on good-to-firm, he was third in the Stewards' Cup off 5lbs higher and if he gets a decent racing position early doors, things may get interesting.

I quite like the chances of Baashir in this 7f handicap. He carries his head proudly and has shown signs of temperament but is undoubtedly talented when everything goes to plan. Gelding him brought about improvement as he posted a career best on this season's return over the extended mile at Nottingham and that's the form that has got me interested. It has received boosts since and on his sole run afterwards, it's possible the All-Weather didn't suit. Back on turf and reunited with fast ground, we might see his best.

First Folio made a solid impression on his debut for this yard in April, bolting up at Yarmouth on fast ground. A couple of winners have come out of that since but it was more the visuals I'd be excited by, as he looked sure to be a big handicap contender later in the season. Indeed, he was fancied at Newmarket last time but plenty went wrong there (not ideally drawn, missed the break & raced on softer ground). I think he'll enjoy returning to a flat track on fast ground and could be set to resume progressive ways.

It could be worth taking a punt on Global Spirit to bounce back to form. He was poor last time out at Beverley but stumbled at the start and wasn't given a hard time when it became clear that he wasn't going anywhere fast in the straight. His run in the Thirsk Hunt Cup looked very good given that it was above his usual grade and also hinted that this extra furlong in distance could bring about some improvement. He has course form, a nice draw and should enjoy how things pan out with regard to pace and cover. 14/1+ is worth a point.

Abate has been on my radar for a while and I've backed him on two of his three runs this season. I was edging towards leaving him alone for a while and that could still be the right approach to take, but he's back to his last winning mark and that victory came over C&D last July when ridden with more patient tactics. He has been going a step quicker than he looks comfortable with so far this season and back up to 6f, he might have a happier mid-race experience. If he hits the line as he can, he'll be in the mix when it matters.