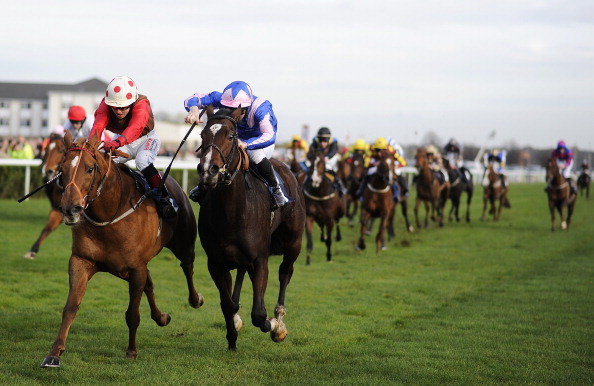 The stalls were my worst friend this time around! Spanish Angel ran a good race, beaten less than a couple of lengths into fourth place, but was slow to stride and didn't get the gallop he needed to pick them off late. He kept going strongly to the line and should be up to winning a race before too long. Keep an eye out.

Count D'orsay was never going to race too far forward but got hampered in the first few strides and that didn't help matters. He never had much of a chance to show his true worth but did stay on and seems to be in good order. All going well, he'll remain competitive in big handicaps but I might leave him alone from here.

Last up came Sir Benedict and he's one who got away, having missed a sizeable beat at the start before making up more ground at an earlier stage of the race than was perhaps ideal. He flew home in the straight but couldn't get ahead of two who got first run on him, going down a head and a neck. Pity!

Note: Could be back with another couple of bets between 12-1pm. Will tweet either way!

Fleeting Prince looks to be worth chancing here. He has been gelded since last seen and was being prepped to run in the Wokingham, only to be pulled out when the ground went soft. Given some of his previous efforts on an artificial surface, this is a suitable alternative and he looks well-treated off 97. A solid pace throughout would help his cause and he seemed to like the track when only beaten a couple of lengths in a C&D Group 3 last June. Double-figured prices shouldn't be on offer for too long.

It's edging towards a few hundred days since Tabdeed has been on the track but going well when fresh hasn't been a problem in previous seasons and hopefully won't be again. He's an interesting contender on multiple pieces of form but his sole All-Weather start was over C&D and yielded a second behind Glen Shiel when conceding 3lbs to a future Group 1 winner. The selection probably won't scale the highest ranks but is very capable at this level and I think there are reasons to doubt the top two in the betting.

Raatea is a keen sort and holds his head proudly at times, so can't be completely trusted to give it his all. However, he's a smooth traveller who will be better than a mark of 85 when he puts it all together and hopefully that starts today. He has only had a couple of runs with his current yard, doing best of the closers over C&D in April and on his sole start since, heavy ground at Haydock in a decent race was no good to him. If he gets a good tow and settles down, he will be finishing off quickly and can get involved.

Michael Bell's horses are in fine order and Stone Circle gave notice that he might be edging back towards a better level of form when beaten little more than a few lengths at Leicester two weeks ago. He couldn't make any proper inroads into a pace that held up, the first two holding those positions throughout, but certainly showed more than on all of his other three spins this season. Dropping to 6f will help, he has won over C&D and he's back to his last winning mark, so hopefully there will be no excuses this time.