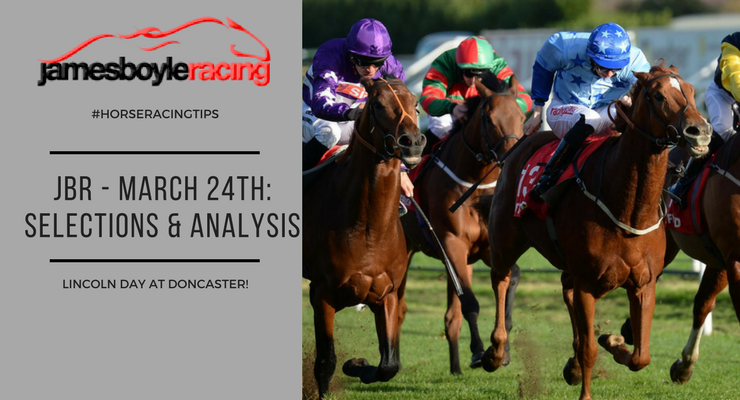 There was nothing to shout home about on the final day of Cheltenham, bar a few places. Overall, I really enjoyed the week and despite a -2.66pt loss if recording to level stakes, it was one of the best festivals I've had in a long time!!! That shows the level where my National Hunt punting had gone to but it's flat season all the way from here on in and I for one can't wait. Opportunities to get bets out will be more regular than has been the case in recent times and hopefully come (a dry) May/June, a proper streak of form has been hit.

In the opening race at Doncaster (1.50), Danzeno is worthy of support at quotes around 13/2. He didn't pull up many trees in Meydan but has fitness on his side and will appreciate underfoot conditions more than most. The fact that he has performed well on both of his starts at the course bodes well and I think he's a few points larger than he should be. Getting away from the stalls slowly often doesn't help his case but a second stakes race success will eventually come along - fingers crossed that it could be this one! I'm keen on him...

Sir Roderic has collapsed from a peak rating of 97 to 81 and is a live player in the Spring Mile (2.25) from a simplistic point of view. Of course, the horse has lost his form and that explains the handicapper's leniency, but he wore a tongue-tie on four of his most recent five starts before subsequently having a wind-op. If his breathing has been at him as much as that suggests, we could see a revitalised version of Rod Millman's charge and any double-figured price appeals, even against a few potentially progressive rivals.

The feature contest today is obviously the Lincoln (3.35) and Grey Britain is my fancy. Similar to Danzeno, Meydan did not go to plan but running in a graded race on dirt last time was fanciful to say the least and he's going to be happier back on turf. Interestingly, there isn't an excess of pace on despite the big field and that could play into his hands. Whether he's quite good enough to stay front rank throughout remains to be seen but 20/1 is worth a shot. If he's in the same form as his Goodwood run in August, he'll be involved.