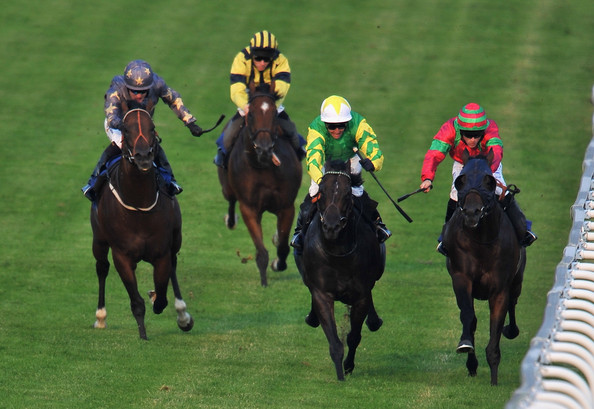 It's a funny ol' game. Three terrible selections and then boom, you've backed the 2000 Guineas winner (for the first time I think!!!) and it has drifted out to 16/1! Poetic Flare returned to the scene of his sole defeat but thankfully it played out that a mile was exactly what he wanted in order to thrive and he put on a fine display. I thought he had been chinned as well but the line came at the right time.

Of the others, Hartswood wasn't completely disgraced on his first run back and should sharpen up. He didn't have a great track position early doors and may not have been as fit as he needed to be. The Gill Brothers was tailed off and taking a chance on him taking to the turf was a bad play. City Wanderer isn't firing at the moment and will hopefully show more soon, as I'll be keeping him on my probably-will-lose-me-money list.

Well, a potentially awful day turned into a cracker and it's nice to kick off May with a win as from here until late August and sometimes into September is when I make most of my flat season profit. Granted, history doesn't dictate what's likely to happen in the future but I'm encouraged for the most part. The current P/L has seen 53 selections, 55.50pts staked, 78.31pts returned for a profit of +22.81pts (+41% ROI). Solid start.

Sound Of Iona hasn't got to show a lot in her two runs this season but she doesn't stay 6f and lined up in a joke race at Doncaster last time where the pace was very slack for a sprint. She was lit up and didn't get much in the way of cover, so it's a run to just ignore. The plus-point from it all is that she's now down 4lbs from the two runs, lining up here off 68, and she defied 71 last season. Back at a suitable distance on a track that I think could play to her strengths, double-figured quotes are on the generous side and she should be backed.

This is technically a Group 2 but in terms of who has turned up, it's more like a good Listed race with one or two runners who could land a Group 3 if the stars aligned. Freyja is not as classy as some of these but she's tough, a simple ride and knows how to win having landed five races already. She's turning out again quickly after making her seasonal debut at Nottingham on Tuesday and that was a cracking effort, only beaten a neck under a penalty. This demands more but I think she's capable of getting involved.