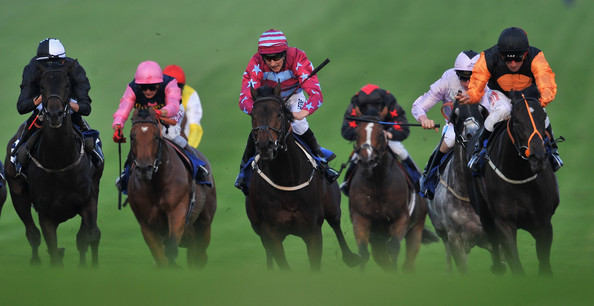 No joy on day one. Sir Busker ran a cracker and it's just a pity they didn't go quicker up top. He finished third overall, second without the favourite, but came up a length short for my bet. Keep Busy also performed well in the King's Stand but was brutally outpaced early doors and got going too late. It was a good ride from Moore and I wouldn't be surprised if she pops up in a Group 1 sometime in the next season or two.

Golden War drifted like a barge and ran like the layers knew he wasn't going to be up to it! Sadly the test on offer didn't suit as much as I thought and he'll need a longer trip in order to step forward. Chindit had no luck in-running, finding his path blocked off multiple times in the home straight, but wouldn't have finished ahead of Poetic Flare regardless so only each-way punters can have any complaints. Needs a jockey change?!

Last up came Father Of Jazz and he ran all right but wasn't good enough. The way he moved was much better than at Doncaster and he galloped on fine, certainly with more encouragement than his spin a few months ago. Whether he'll ever reach the level I was thinking he was capable of is definitely questionable but maybe an ease in the ground could see him worthy of taking a chance on at some stage later in the season.

* - Price advised on twitter to get ahead of the queue!

Instinction was a filly I thought would be capable of mixing it in some good races and Illustrating beat her convincingly at Catterick a couple of weeks ago. That has peaked my interest in her here and the performance was made all the better on account of it being her debut, plus the track itself wasn't ideal. The experience should see her step forward, she's nicely bred (dam a Group 1 winner) and a stiff 5f will suit. If she gets covered up and is in the right place from a middle draw, I think she'll come home well.

Onassis could take advantage of the top two in the betting carrying penalties and is sure to be trained to the minute for this. Indeed, she reappeared last season to bolt up in the Sandringham and Charlie Fellowes went within a head of getting Dubious Affair to defy a similar break in the 1m 6f handicap on Tuesday. The straight track at Ascot is obviously perfect for Onassis and her running style, and my only worry is whether there's going to be enough pace on here. It could go either way but at 12/1, it's worth the risk.

The Hunt Cup has been kind to me over the years and Astro King could well be the answer to this year's equation. He doesn't do things that quickly but is the perfect type to thrive off a rapid gallop on a straight mile. The turning nature of Thirsk, along with having an overly wide trip, caught him out in their big handicap last month but he still shaped well by running on into third. His form with Finest Sound is rock-solid and stall 27 is around the place I'd want to be. If he can hack the early pace (should be fine), he's the one to beat.

George Boughey has proven himself an excellent trainer this season and spoke about Apricot Moon as being targeted at this race way back in March. A month later she debuted for the yard over 1m 2f at Nottingham but wouldn't have appreciated how that race panned out and could have needed the spin in any regard. Dropping to a mile will help, whilst the rattling fast ground may be what she wants based on her Irish 1000 Guineas last term. Off a mark of 90 in a first-time tongue-tie, 50/1 looks huge.